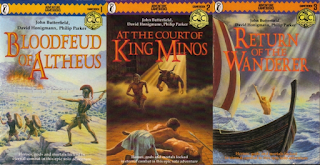 Across 1985 and 1986, the three volumes in an adventure gamebook series called Cretan Chronicles were published by Puffin Books. Puffin also published the hugely popular Fighting Fantasy range, but whilst the Cretan Chronicles had some elements of the FF design in their covers, they were also distinctly different.

I’ve never been able to ascertain what, if any, relationship the two series had beyond both having the same publisher. They were under the ‘Adventure Gamebooks’ banner that Fighting Fantasy and its various spin-offs also appeared under (as well as Starlight Adventures, a series of gamebooks aimed at girls and also seemingly not directly related to FF), and feature a logo that obviously puts one in mind of the FF one, and internally they’re even typeset the same. But no mention of the bigger series is made within the Cretan Chronicles, and indeed the various visuals are where the two series’ similarities end.

Those of you who noted the fleeting reference to them in my review of the Horror Classic Gamebooks have probably gathered that I don’t think the Cretan Chronicles are terribly good. I read them (or attempted to read them) as a child and was completely baffled by them, and as an adult they seem just as perplexing. My reaction to them is much the same as my reaction to this.

Let’s start with the rules. The basic rules of most Fighting Fantasy books were fairly quick to pick up. Roll dice to get your SKILL and STAMINA scores (you always had to type the name of stats in all capitals, for whatever reason). In combat, you roll dice and add the total to your SKILL score, and the one with the lower total gets wounded and loses STAMINA. Repeat until someone’s dead. There’d be other things to worry about, such as your LUCK score and the occasional wildcard thrown in by specific books, but they were in much the same vein and easy to understand.

The rules of the Cretan Chronicles... perhaps weren’t quite so simple. I’m not going to type out the whole eight pages of rules here, but here’s an example of one of the four different statistics we’re introduced to on the first two pages:

Protection is made up of a combination of Altheus’ inborn skill at dodging and the sum total of the armour he happens to be wearing. Altheus has inborn Protection of 10. Now suppose that he has greaves and a helmet. The greaves give 1 point of Protection, and the helmet 2. His total Protection value in this case is 13 (10 + 2 + 1). Protection is used mainly in combat, to determine how difficult an opponent will find it to strike at Altheus successfully.

This introduces perhaps the series’ biggest problem, and one I’ll cover in more depth later on: it’s a bit overwritten. It has taken five lines to cover a fraction of the rules regarding combat, when you could summarise Fighting Fantasy’s combat system in less space. Why not just cut down the first two sentences to “Protection represents Altheus’ ability to avoid damage” or something? And describing what happens if you have greaves and a helmet (neither of which you start the adventure with, incidentally) is totally unnecessary – just cover that during the adventure, in the event that the player finds such items.

The combat system also has a massive flaw. Pretty much any adventure game, in any format, has a STAMINA statistic, or HIT POINTS, or LIFE POINTS, or ENDURANCE, or whatever they’re called. Not so the Cretan Chronicles. A character can be in one of four states: Healthy, Wounded, Seriously Wounded, or Dead. No character can take more than three hits without dying, and in most cases you are discouraged from attempting to actually murder your opponents so need only get them to Seriously Wounded. The authors have tried to come up with something new as part of their rather over-complex combat system which doesn’t really work, and it’s odd that this is basically the only part of the entire series to simplify something in comparison to Fighting Fantasy.

The rules also require you to keep track of Might, Shame and Honour. As the book tells us:

[Shame] is accumulated by such cultural faux pas as slaying one’s opponent after he has surrendered, retreating ignominiously from a fair fight, or failing to perform heroic deeds. Such gross crimes as patricide, marrying one’s own mother or failure satisfactorily to maintain one’s armour will be penalized by a greater increase in Shame points.

Putting aside the questionable decisions to equate murdering your own father with not keeping your armour clean or describing killing somebody as a faux pas… who, exactly, are these books aimed at? They’re published by Puffin Books, Penguin’s label for children’s books, but even the darkest Fighting Fantasy didn’t give the player the option of marrying their own mother. They also published a Fighting Fantasy spin-off aimed at older readers, Steve Jackson’s Sorcery!, under the Penguin Books imprint to reflect the different target audience; why weren’t these books afforded the same?

The book then takes two utterly tedious pages to give an example of the combat system in action. I’m afraid well over a decade after attempting to read this as a teenager, I find it little more comprehensible than I did then. Here’s a sample:

At this point, Altheus rejoices, thinking that both Cretans will surrender. By turning to the appropriate paragraph, however, he finds that they are fanatical defenders of the labyrinth of Minos, and will never surrender. As neither side can score a hit – the Cretans are only using one die, and Altheus feels he cannot use any Honour as it would fall below his Shame, and if he failed to hit he would die – both sides are permitted to roll two dice instead of one.

If your combat system needs to have a contingency plan for what to do if it is impossible for either party to hit someone, maybe it’s not really working?

The rules also require you to choose one of the Gods as your patreon. You also need to keep track of the other five Gods and whether you are in favour or disfavour with them, which again makes a potentially interesting idea a bit too over-complicated. Finally, there’s the Taking a Hint mechanic. If a section number is in italics, then you add 20 to the number to reach a new section where you “attempt a non-standard action”. In theory, this is a very interesting idea. Unfortunately, it requires you to be on the same page as the writers as to what this action might be, as if you attempt to be “ahead of your time” you will be penalized. And sometimes the results of attempting to ‘take a hint’ are so utterly bizarre I can’t even tell what they were aiming at. Apart from one example where ‘taking a hint’ takes you to a section that just says “Concentrate!”, nowhere is this better demonstrated than what happens if you attempt it when you meet the Minotaur in book 2, which produces what is surely the oddest paragraph in gamebook history:

You are indeed right to shake at the sight of the Minotaur, for, after all, your brother, a distant relative of the beast, was not spared its wrath. Theseus was probably in fact only your half-brother (have 1 Shame point), with Poseidon as his true father. Although the origins of the bull which sired the Minotaur are shrouded in sea-spray, according to the most reputable sources Poseidon had a hand in its conception. The bull ravished Minos' wife, Pasiphae, who gave birth to the Minotaur. Theseus was thus the half-uncle of the Minotaur. For unravelling the genealogical complexities of the situation at such a stressful moment, have 3 Honour points, and return to 394.

(Before we finish up on the rules, I feel the need to mention that they contain the line “Death will, in most cases, be fatal!” That admittedly makes sense in context… but it might have been a good idea to point out that, within the game, death is sometimes not fatal before saying that.)

Onto the game itself. The three volumes form one big, over-arcing adventure, and for this at least I can give the authors some credit: it feels epic in a way few other gamebooks ever achieved, helped by a lot of variety in the settings. The setup is that Altheus, the younger brother of Theseus, must take on the task of killing the minotaur after Theseus is killed in the attempt, encountering various Greek myths (at least one of which originally happened to Jason) along the way. Unfortunately, the text is repeatedly plagued by the same problems as the game’s instructions: being overly florid and not really knowing who it’s aimed at. It seems the three authors were all schoolboys from Eton at the time they wrote them, which probably explains something.

You’ve probably already guessed that the Cretan Chronicles is set in the Ancient Greece of myth. This is probably where the big problem comes from: the authors are trying to capture Classical Greece in the text, but they end up with purple prose instead, occasionally going so far as to just be… strange.

No hero should be afraid of crowds. Does the very sight of the sea make you sicken?

You awake to find that Procrustes the innkeeper has chopped off both of your legs to make you fit the bed. As you bleed to death, you have just enough time to gasp a prayer to Zeus to save you.

The Ancient Greeks were often unhappy in the dark. So are you.

I get the feeling these books are the sort of things that really need to be read to be believed. But they’re simply baffling (and the innkeeper chopping off both your legs makes as much sense in context as it does there).

One thing I do want to mention is the ending to the last book. It’s a tricky one to reproduce or describe without the context of playing all three books… but suffice to say I don’t think it really works. It is, however, an attempt to give a different type of ending, one that you really wouldn’t get from Jackson, Livingstone, Brennan, Dever or any of the other gamebook writers of the day, and it’s one of the few times where I think I can see what the authors are going for, and it’s interesting, maybe even thought-provoking. (It’s also the only time the florid writing style really works for me.)

Ultimately, however, I don’t think this series is very good. I admit that part of this is probably down to finding them totally incomprehensible as a child – but that’s something that only slightly changed when I revisited them as an adult. I applaud any attempt at ambition and to give readers something different, and the Cretan Chronicles certainly try that. A lot of the ideas the authors came up with are definitely interesting, but in execution they’re too inconsistent or odd, and coupled with an overly complex game system, and I’m too uncertain of who they’re actually aimed at for me to recommend them, except maybe to a scholar of Greek myth, or somebody who wants to check they really are as odd as described here.
Posted by Christopher Wickham on December 14, 2016