After a fair bit of time on the Internet Archive, I've finally found it (or most of it, at any rate): Fantasy Robot Wars, the unofficial RW equivalent of Fantasy Football Leagues way back when during the original series' run, as masterminded by Jamie McGarry, webmaster of the Panic Attack fan site. That this was the best way of inventing and battling your own robots available to us speaks volumes about the quality of the Robot Wars computer games.

Read more »
Posted by Christopher Wickham on April 28, 2019 No comments: 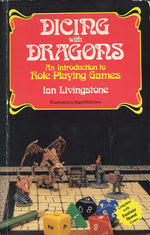 When Steve Jackson and Ian Livingstone were first commissioned by Puffin Books in the early 1980s, it was with the intent that they would write an introductory guide to role-playing games. They got a short way into the writing process before deciding that they'd rather write their own solo fantasy adventure, which became The Warlock of Firetop Mountain. However, Livingstone did still end up writing the originally promised guide, albeit for a different publisher; this was Dicing with Dragons, published by Routledge & Kegan Paul in 1982, the same year as Warlock.

Read more »
Posted by Christopher Wickham on April 21, 2019 No comments: 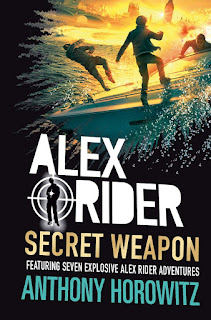 Some eighteen and a half years since he first burst into the world of young adult novels, and eight years and three books after author Anthony Horowitz categorically declared he was done with the series and there definitely wouldn't be any more, teenage superspy Alex Rider is still going strong, with Secret Weapon the twelfth and latest instalment in the series. What we have here is a slightly different proposition to the norm - a collection of short stories, some of which have been previously published in newspapers or online, and some of which are completely new for this anthology. This release is more significant than it first appears - it was working on this collection that convinced Horowitz he might have been too hasty in ending the series with Scorpia Rising in 2011 and resulted in its revival two years ago with Never Say Die, with at least two more full-length novels to come before the series really is over for good (the first of which, Nightshade, will be out early next year). But how do the seven bite-sized instalments contained in Secret Weapon measure up?

Read more »
Posted by Christopher Wickham on April 17, 2019 No comments: 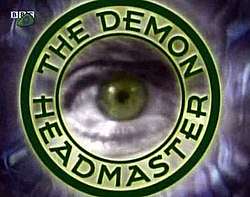 Q: Who was the first actor to play the Demon Headmaster for the BBC?

You may not be particularly surprised to learn that the A to that particular Q is not Terrence Hardiman. Some 6 years before the CBBC series, the first two books were adapted for Radio 5 Live by Jim Eldridge in October 1990, in a format perhaps coincidentally very similar to how the first TV series would later handle them: a 4x25 series, with the eponymous first book covered in the first two episodes and The Prime Minister's Brain in the second. The only difference is that the TV series gave each book an extra episode; perhaps as a consequence, the characters of Ingrid, Lloyd and Mandy are all merged into Ingrid in the radio version. Anyway, the cast for the radio version was Edward de Souza as the Headmaster and Lucy Speed as Dinah.

To tie in with the TV series, the radio series was released on cassette on 1998, bearing the TV series' logo and font. It doesn't appear to have ever been released on CD, which I find slightly surprising given the series' enduring popularity. If you'd like to hear it, though, you can find it on the Internet Archive. (One wonders if they were ever tempted to realise The Revenge of the Demon Headmaster as a radio play, given it was skipped for the TV series on the grounds of being absolutely unfilmable. Probably not. For yet another little-known adaptation you may not have heard of, there was also a stage musical in 1999, for which Terrence Hardiman reprised his role.)

Posted by Christopher Wickham on April 14, 2019 No comments:

Nearly every Robot Wars fight ever filmed was edited down in some way. (I have covered some of the more glaring examples in the past.) No fight that lasted the whole 5 minutes made it to air in its entirety, with some lasting less than 2 minutes once the editor had got their hands on it; I believe the record for least cut full-length battle is the Series 6 Grand Final, which only had about 20 seconds trimmed from it. Usually, however, the edit was done well enough that it wasn't too obvious. Apart from this one.