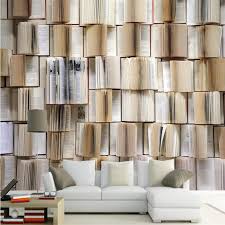 We've reached the end of another year, so now seems a good a time as any to round up the best of the blog since the last time I did one of these. See you in 2019!

Read more »
Posted by Christopher Wickham on December 30, 2018 No comments:

Copyright Roasting on an Open Fire

Longtime readers of the blog might remember my dissection of The Simpsons Xmas Book, a novelisation of the first ever full-length Simpsons episode, "Simpsons Roasting On an Open Fire", at the end of which I postulated the additional material in the book might be from some alternate version of the episode. Well, here's something to add fuel to the fire. 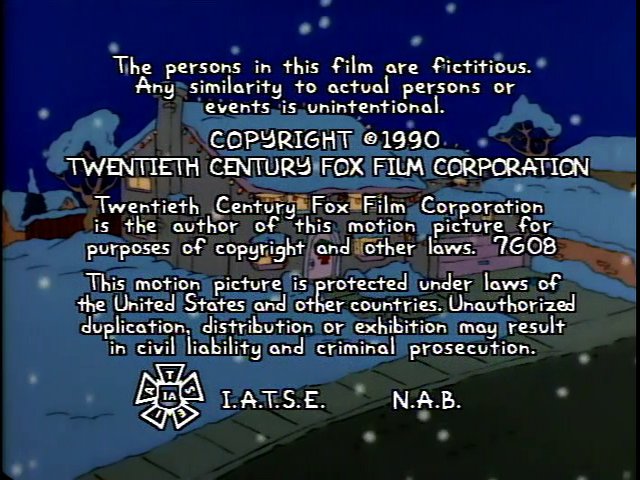 Why does the episode bear the copyright date of 1990, when it was produced and obviously intended for broadcast in 1989?

Read more »
Posted by Christopher Wickham on December 24, 2018 No comments: 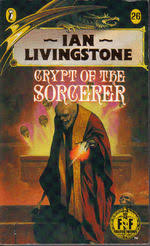 The final boss of Crypt of the Sorcerer, the twenty-sixth book in the original Fighting Fantasy series and published in 1987, is the titular Sorcerer, Razaak. His combat statistics are SKILL 12 and STAMINA 20 - more or less the highest possible scores the player character can have. This is compounded by the fact that if Razaak wins two combat rounds in a row, you die automatically. Somebody actually did the maths on this thing and, provided you have the same or slightly higher statistics as Razaak when you fight him (i.e. you rolled the highest possible SKILL score, and near enough the highest possible STAMINA score, and are still at full health) then your chances of winning are 5.5%... which would obviously diminish the lower your scores are. This is an impossibly one-sided encounter.

Read more »
Posted by Christopher Wickham on December 23, 2018 No comments:

Email ThisBlogThis!Share to TwitterShare to FacebookShare to Pinterest
Labels: gamebooks (broken), gamebooks (other) 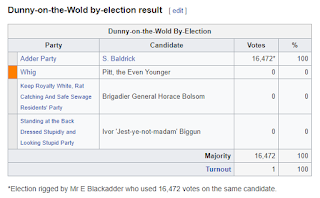 Immediately before their coverage of the 1997 General Election, BBC One ran something rather interesting - a repeat of the election-themed Blackadder the Third episode Dish and Dishonesty. It is a rare example of the BBC's mainstream channel tying into an election on the day - the only time they've attempted to do so since is 2010, when Have I Got News for You was moved out of the Friday night slot it had occupied for 19 years by scheduling genius Jay Hunt and plonked on Thursdays, with the stated reason that it would allow them to do an election special on the day Britain went to the polls. However, on the actual day of recording itself, they realised that if they went ahead with this plan the episode would be broadcast before the polls had closed, meaning the panellists would be forbidden from expressing any opinionated comments about the election. Realising this was less than ideal, the episode's recording date was hurriedly shifted to Friday morning, for broadcast later that evening. (This tight turnaround is also used by whichever Radio 4 is running at 6.30pm on Fridays at the time of the election - indeed, The News Quiz has often recorded on Friday morning for episodes during the campaign, rather than just the episode immediately after the results.)

Read more »
Posted by Christopher Wickham on December 16, 2018 No comments: 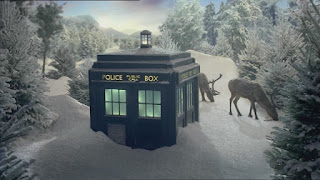 For the first time since its triumphant return to our screens in 2005, there is no new episode of Doctor Who on Christmas Day this year, with the new production team plumping for a New Year's Day special instead. But if you're desperate for a fix of festive Who before the year is out (and want to do something slightly more interesting than rewatch some of the previous years' specials), why not look to parts of the show's spin-off media instead?

Read more »
Posted by Christopher Wickham on December 09, 2018 No comments: 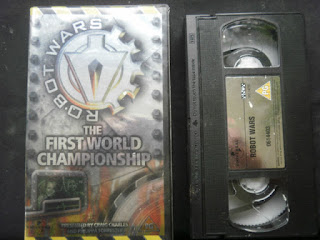 Whilst getting the links for the old Robot Wars Club membership pack videos off of YouTube, I have made several remarkable discoveries readers of the blog might like.

Robot Wars Revealed, the Series 2 spin-off show that has languished in obscurity since its original broadcast due to airing on a newly launched channel, previously only had one known surviving episode. But now a second one's only gone and bloody turned up!

The next discovery is even better, though. Seven whole minutes of footage from the pits, shot via hand-held camcorder by one of the 13 Black team (for the curious, this footage can be dated to exactly 26 August 2001 by the team's own website). The same account also gives us five minutes of test footage from when the robot was first built, and footage of their Series 2 entry Limpet dating from August 1998.

And, for good measure, an appearance from Mike Lambert of the Dantomkia team on Harry Hill's TV Burp.

Posted by Christopher Wickham on December 05, 2018 No comments: 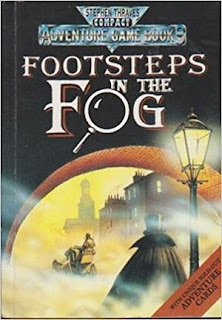 It's the late eighties and early-to-mid nineties, and adventure gamebooks are huge in the United Kingdom, with the popularity of Fighting Fantasy having prompted every other publisher going to jump on the bandwagon. One of the more prolific gamebook authors who never wrote for FF is one Stephen Thraves, and I am truly grateful for his name providing the pun in the title of this article. But what about his gamebooks?

Read more »
Posted by Christopher Wickham on December 02, 2018 No comments: