A bit of a break this week so I can recap some outstanding mysteries the blog has covered in the past and hopefully bring some fresh attention to them:

Edit Wars: I am still looking for a copy of the original BBC Choice broadcast of this episode. (All I have ascertained since the post was originally written is that America and Challenge have the revised copy, which isn't a huge surprise.)
Edit Wars #4: There are a number of points in this article I'm unsure on that would probably need somebody involved in the production or in the audience of the original episode(s) to clarify, for example the Evil Weevil vs Triterobot one.
Just Ask For South By South East, Just Ask For South By South East... Again and Just Ask For South By South East... Yet Again: I am still looking for any footage from the television series I search for in these articles.
Posted by Christopher Wickham on July 29, 2018 No comments:

A Humongous Quiz (But Not In That Sense) 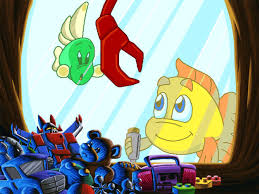 Humongous Entertainment's point-and-click games of the nineties have been discussed on the blog before, in probably unnecessary detail. For something slightly different, here are some of the puzzles that would have faced a child between the ages of 4 and 10 back in the day; can you, someone who I'm presuming is a grown adult, work out the entirely intuitive and logical solutions? Answers at the bottom of the article.

Read more »
Posted by Christopher Wickham on July 22, 2018 No comments: 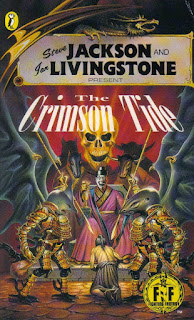 This is another famous Fighting Fantasy faux pas that no series called "Broken Gamebooks" would be complete without mentioning, and also an important lesson in proof-reading.

Read more »
Posted by Christopher Wickham on July 15, 2018 No comments:

Last Exit to the Writers' Room

The year is 1993, production on the fourth season of The Simpsons is drawing to a close, and the show's original writing team is beginning to break up. Al Jean and Mike Reiss - a writing partnership who have been with the programme since the very beginning, and have been in charge of the show for the past two production seasons - are giving up the reins of the show to develop their own animated sitcom, The Critic, for ABC. Many others are on the way out: Jay Kogen and Wallace Wolodarsky, another duo around since the start, have already left before this production season has even finished. Also gone are Jeff Martin, David M. Stern, Jon Vitti and, most notable of all, series developer and creative supervisor Sam Simon (following pressures on his relationship with co-developers Matt Groening and James L. Brooks). George Meyer hangs around, but in a reduced capacity as 'creative consultant'. Two others stay on full-time, but extremely briefly: Conan O'Brien leaves after only a few episodes of the fifth season when he gets a gig elsewhere, and Frank Mula stays for around half of it. That just leaves John Swartzwelder as the only writer/producer from the original team sticking around full time (the following season he obtained special dispensation to work from home and his credit changed to 'consultant').

In the summer of 2001, two new series of Robot Wars were filmed: the fifth series of the 'regular' show, and Robot Wars Extreme, a special run of shows featuring a variety of different mini-tournaments. The Pussycat team, with driver David Gribble, participated in both of them.

On the 13th of October 2001, David - a familiar face to Robot Wars viewers for nearly three years - was involved in a motorcycle accident and passed away at the tragically young age of 17; his final television appearances were aired posthumously. Various sources say that this dedication was featured at the end of Extreme episode 1, taken from the Robot Wars Wiki: 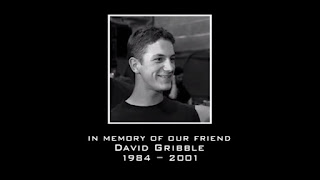 At the time, Robot Wars was first run on BBC Choice, then got a terrestrial outing on BBC Two a few weeks later. I would presume that this was seen on the 26 October 2001 BBC Two broadcast of episode 1; the episode was originally broadcast on BBC Choice on 8 October 2001, five days before David died. Eight new episodes of Robot Wars were broadcast on BBC Choice between David's death and the first BBC Two screening of the series; it is possible that one of those also carried the dedication, and they also used it on the first episode's terrestrial outing to make sure it was seen. (For the record, David's final appearance on the show was the Series 5 semi-final, which was originally broadcast on BBC Choice on 23 May 2002 - but that episode would not be seen by terrestrial viewers until 25 October of that year, over a year after his death.)

Read more »
Posted by Christopher Wickham on July 01, 2018 No comments: