You may wish to turn your attention to this video, which is taken from an episode of Robot Wars that was broadcast on BBC2 on 23 November 2001. (The episode is split up into parts, and the footage we're interested in continues into the next part for about 20 seconds.)

At some point between those two broadcasts, there was an anthrax scare in the US which necessitated the change of name and a re-edit of the episode for its terrestrial screening. (It’s a good thing the team hadn’t had any T-shirts made.) All I know for sure is that the version on YouTube above has a re-recorded commentary by Jonathan Pearce, but I’d like to see the originally broadcast version if possible to know exactly what edits or changes were made.

So, if you have a copy of the original version of the episode, do get in touch. (Rather sadly, there are at least two other articles about Robot Wars and strange editing I can think of writing, but this is the only case of there being two versions of the same episode that made it to air – definitely of this show, and possibly of any gameshow I can think of – so it’s probably the most interesting.)
Posted by Christopher Wickham on January 27, 2017 No comments: 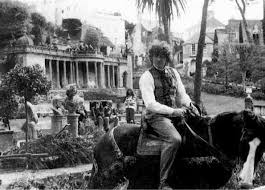 It is rather odd how The Prisoner and the original series of Doctor Who have no writers or directors in common.

Lewis Greifer (who wrote the Prisoner episode "The General" under the name Joshua Adam) submitted the story that ultimately became the 1975 Who serial Pyramids of Mars, but the original version was deemed unusable and rewritten so completely by script editor Robert Holmes that what was ultimately broadcast was essentially a totally different story (and used the pseudonym "Stephen Harris"). So I don't think we can really count that. And Moris Farhi had scripts for both the very first season of Who and The Prisoner rejected... so it definitely could have happened, but it just didn't.

Anyway, there's a thought that was slightly too long to coherently express on Twitter. You're welcome to it.
Posted by Christopher Wickham on January 24, 2017 No comments:

Email ThisBlogThis!Share to TwitterShare to FacebookShare to Pinterest
Labels: doctor who, the prisoner

Yesterday was a quite remarkable day, and everybody involved in the marches across the world should feel incredibly proud of their achievements. It was the first day that I, and a great many other people, were able to feel hopeful about the future in a long time. But while I don't doubt for a second that there will be days like that again... there will also be days like Friday.

So I thought I'd make a list of things that happened yesterday. And hopefully remind us that, as a wise man once said, "out of their evil must come something good."

Read more »
Posted by Christopher Wickham on January 22, 2017 No comments: 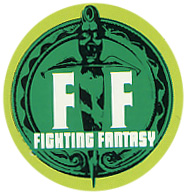 One of the great things about interactive fiction is the sheer number of opportunities it affords you to kill yourself in a great many imaginative ways, with none of the downsides of actually dying. Here, then, are my 50 favourite ways to die in perhaps the most famous adventure gamebook series of them all, Fighting Fantasy.

The Signs of the Fourth

SPOILER WARNING: This post ruins pretty much every big revelation in the 2017 series of Sherlock. (I'm going to rise above jokes about that being the writers' job.) 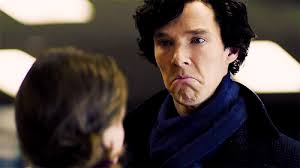 In July 2010, a new detective series – a contemporary reimagining of Arthur Conan Doyle’s Sherlock Holmes stories by Mark Gatiss and Steven Moffat – began on BBC One. I watched the first series as it went out and I thought it was absolutely terrific, unquestionably one of the best things on television that year. A second series followed in January 2012, and although I had some problems with the handling of Irene Adler in the first episode I thought it was generally pretty great as well.

Then there was a third series in January 2014. And unfortunately I wasn’t so keen on that, or most of what came afterwards (a one-off special in 2016 followed by a fourth series in 2017). When that last series went out I decided to go back and rewatch the first episodes I’d enjoyed so much, compare them to the more recent ones, and try to pinpoint where, for me, the show went wrong, what was different about the later episodes that made me less keen on them. And I thought I could get a blog post out of it.
Read more »
Posted by Christopher Wickham on January 16, 2017 4 comments:

A Number of Any Kind


The Prisoner, Patrick McGoohan’s groundbreaking 60s drama series, is well-known for having a production history as complex and intriguing as the show’s narrative. This affected the show’s running order when it was first broadcast for various reasons (some of which we’ll get to later in this piece), and over the next five decades there have been a great many arguments about what order they should actually be watched in. So, whilst scrabbling around for something to write a blog post about, I thought I’d have a go myself.

Read more »
Posted by Christopher Wickham on January 14, 2017 No comments:

Email ThisBlogThis!Share to TwitterShare to FacebookShare to Pinterest
Labels: the prisoner

In Praise of The Bodysnatcher Collection

Here are some things that are on the Red Dwarf DVD boxset The Bodysnatcher Collection (released 2007), which started out as a collection of the three Remastered series (versions of the first three series, originally broadcast in 1988 and 1989, digitally remastered in 1998 principally to replace all the nice model shots with crappy cheap CGI and add a film effect to a late-eighties studio sitcom that obviously wasn’t shot or lit for it – as you may have guessed, the Remastered episodes were not well received) but ended up as so, so much more.
Read more »
Posted by Christopher Wickham on January 08, 2017 No comments:

Yes, We Know Who You Are 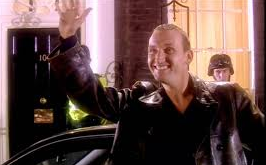 There’s something unusual about the 2005-10 period of Doctor Who, when Russell T Davies was its executive producer and head writer. (Well, there’s probably lots of unusual things about it, but this blog post is only interested in one of them.) Classic stories from the 1970s implied that in the near future, Jeremy Thorpe or Shirley Williams were Prime Minister of the United Kingdom, the 1988 Sylvester McCoy story The Happiness Patrol features a thinly-veiled parody of Margaret Thatcher as the villain and, after Davies was gone, Matt Smith’s Doctor would meet Winston Churchill on a number of occasions (Ian McNiece’s portrayal of Churchill is now the subject of a spin-off series of audio dramas courtesy of Big Finish Productions). But in Davies’ era, the Doctor actually meets the Prime Minister of the day - or at least, the person who’s meant to be the Prime Minister of the day in the Who universe. In fact, he meets several of them. So, then, here we have a chronicle of all the PMs of the time and an attempt to work out a rough political timeline of the United Kingdom in the Doctor’s world.

Read more »
Posted by Christopher Wickham on January 06, 2017 No comments:

Email ThisBlogThis!Share to TwitterShare to FacebookShare to Pinterest
Labels: doctor who, politics

My Favourite Simpsons Fact Ever 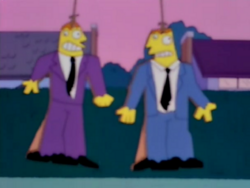 This was salvaged from a much longer post which I decided midway through writing was unusable, but it's something I like so much I still want to post it.

In the 1996 episode of The Simpsons "Two Bad Neighbors", in which former president George H.W. Bush moves in across the road from Our Favourite Family, Homer tries (and succeeds) to trick Bush into leaving his house by placing the two cardboard cutouts pictured above on his front lawn, ringing the doorbell and saying "It's your sons, Jeb and George Bush Jr!"

The writers had no idea that George W. Bush (then Governor of Texas) even existed at that point. The line was meant to be an example of Homer being stupid. This is, for whatever reason, probably my favourite fact there is about The Simpsons.

Posted by Christopher Wickham on January 02, 2017 No comments: