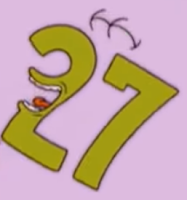 The end of the year approaches. Christmas decorations start appearing in the shops. Fireworks go off with increasing frequency. Channel 4 gets the rights to a new-to-terrestrial season of The Simpsons, as first shown on Sky One four years ago.

On past form, that last one - this time being the debut of Season 27 - should start roughly about mid-November, in the tried-and-tested slot of weekdays at 6pm, so keep an eye on The Simpsons Archive's UK scheduling page for exact details. (Thanks to Wesley Mead, maintainer of that page, for helping out with a few details in this article.) If you do happen to watch Channel 4's debut of the 2015-16 season, here are a few things to watch out for - principally possible censorship cuts, but also other geeky notes of interest.

TABF19 Puffless
There is a joke in this episode about Homer pouring bleach into his eyes that was cut by Sky (I haven't seen the unedited version so I don't have it in exact words; presumably Sky's edit was pretty seamless if I didn't notice any cut). This seems highly unlikely to make the edit on Channel 4, at any rate.

TABF22 Halloween of Horror
Sky One has consistently refused to air this episode pre-watershed, citing concerns over content that makes it inappropriate to show then; it was skipped from their initial run of this season, and eventually turned up in a 1am slot near the end of the run in May 2016. According to Wesley, there have been just two scheduled repeats since then, both at slightly more reasonable (but still firmly post-watershed) times - Halloween 2017 at 11pm, and Halloween 2018 at 10.30pm.

Quite why Sky feel it is only appropriate to air this episode so late is a mystery, as there is absolutely no content in it whatsoever that would make it unsuitable for pre-watershed broadcasts. It would be a terrible shame if Channel 4 took the same inexplicable umbrage with it, as the episode is comfortably one of the best the show has produced since 1997, and is well worth your time even if you are the sort of person who stopped buying the DVDs around Season 10.

TABF18 Treehouse of Horror XXVI
The first segment of this episode is the hyper-violent "Wanted: Dead, Then Alive", in which Sideshow Bob finally fulfils his dream of killing Bart, but then finds his life so empty without his arch-nemesis that he brings him back to life so he can kill him again and again and again.

When Sky first broadcast this episode, this segment was absolutely cut to ribbons, with casualties of censorship including most of Bob's initial killing of Bart, Bob hiding the evidence of his crime from Skinner and the rest of the Simpsons, his uses for Bart's corpse, and several of Bart's deaths in the montage. If it sounds to you like Sky's edit was a borderline incomprehensible mess, then you're correct.

Channel 4 are far more squeamish about violence in the show than Sky, so if Sky made so many edits for content to this it seems impossible that C4 would show it uncut. In fact, Season 26's Halloween special (XXV) was skipped over by C4, even though Sky had shown it mostly or completely intact at a similar time, and eventually showed up in a post-midnight slot the following August.

On the face of it, it would seem a similar fate awaits XXVI on the terrestrial channel. However, XXV was likely deemed unsuitable for broadcast in the 6pm slot because of concerns over content in all three segments and the opening sequence, whereas it's not unthinkable that the rest of XXVI could air on C4 intact. So it is possible that they could air it pre-watershed with a heavily edited version of the first story.

TABF20 Lisa With an 'S'
During this awful exchange when Marge is trying to speak with Lisa over Skype:

MARGE: Are you sure you set it up right?
BART: Yes!
MARGE: Then why aren't we Skyping?
BART: I don't know, maybe Lisa's drugged out.
MARGE: My daughter is not drugged out!
BART: Maybe she's just sleeping late after partying at discotheques.

I reckon the two lines highlighted as such might be candidates for cutting, it would look fairly seamless, and would significantly improve the episode into the bargain. (See below for more on Channel 4's sometimes inexplicable attitude towards drug references, mind.) It might also be worth watching out for Moe relabelling 'Gin' as 'Ginger Ale', etc., to trick a sober Barney into getting drunk, although I may be overestimating C4's tendency to cut there.

On a side-note: Following his death in March 2015, this was the first episode not to credit Sam Simon as an executive producer (as it was the start of a new production season), with that screen only having credits for Brooks and Groening (although Simon did of course retain his 'developed by' credit at the start of the episode). However, the decision to stop crediting Simon as a producer only lasted a few months; his executive producer credit was reinstated beginning with "Lisa the Veterinarian", the eighth episode of this production run. I don't know why they decided to start crediting him again, or if they ever went and put his name back on the other episodes.

VABF02 Barthood
At the end of the opening scene, after Homer is revealed to have fallen down the stairs, Bart asks "Why is blood red?", on account of it now pouring out of Homer's ear, which might get cut; C4 seem to generally not like blood in the show these days.

(By way of example, look at the Sky Police song from the Season 26 episode of the same name. This was shown uncut on Sky, but C4 censored Wiggum mincing the two graffiti artists, and since they did it in a reasonably careful way it's worth mentioning exactly what they did - they slowed down the footage of Wiggum landing, so as to avoid messing up the song, then cut away before any blood was seen.)

Channel 4 seem to be bizarrely lax about drugs references on the show at times ("Weekend at Burnsie's" aside), as Marge getting drugged in Season 26's "Blazed and Confused" managed to pass by intact, so it will be interesting to see which approach they take with this one.

VABF13 Simprovised
At the end of this episode, there is a live segment where Dan Castellaneta improvised in-character whilst David Silverman hovered over this control board to capture his movements. In fact, there were two versions of this in America: one for the east coast, and one for the west coast.

Sky initially intended to simulcast this episode live with the US (I don't know if they planned to show the east coast or west coast feed) at 2am, following the double-bill of "Halloween" and "Constant Sorrow". However, this did not go ahead, presumably when someone realised the advert breaks meant it would be impossible to sync the UK and US feeds. When the episode was aired in the show's usual Sky timeslot, we got this: a pre-recorded version intended as a contingency if something went wrong, which was also to be used for international versions. Presumably, that is the version Channel 4 will also get. (The bit earlier in the episode where Chief Wiggum steals a crossbow from the evidence locker as a present for Ralph seems quite likely to be cut, in addition.) Perhaps a more interesting question is which version will be considered the 'dominant' one when Season 27 is released on DVD in 2033 or whenever they get round to it, and how/if they include the other two...

This clip was also made in response to Sky's planned simulcast going tits-up, although I don't believe it was ever shown on television over here. (There also exists a similar apology for the live segment airing without sound in Latin America.)

So, those seem like the most likely cuts to me, although C4 are sometimes hard to predict; they cut out the last eight seconds of this couch gag, for example. I'll try and make notes on Twitter as this season airs, and do an update here once they've finished airing it.
Posted by Christopher Wickham on October 06, 2019