From Cabin A to Cabin Z 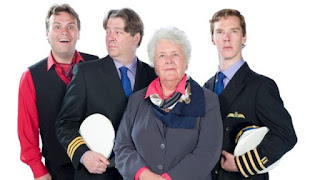 Ah, Cabin Pressure. Whilst unquestionably a very funny show in its own right - certainly the funniest heard on Radio 4 in quite a good few years - halfway through its original run it was unexpectedly catapulted to international fame quite unheard of for a Radio 4 sitcom when one of its main cast, a certain Benedict Cumberbatch, began starring in a new crime drama on BBC One, instantly creating a massive fanbase which was eager to seek out some of his other work. By happy coincidence, a repeat run of the second series of Cabin Pressure began in the same week as that first series of Sherlock, and the rest is history.

Cabin Pressure ran for a total of four six-episode series plus two specials, totalling 26 episodes. That is the same number as there are letters in the alphabet. This is not a coincidence, as each episode is named after the location the crew of MJN Air are flying to that week, and the series works its way through the alphabet from A to Z: starting with the first episode, "Abu Dhabi", and all the way up to the grand finale, "Zurich". At least, that was the intention, and how the episodes were written and recorded: the actual broadcasts hit one or two snags.

Before we get started on those snags, it is worth noting that whilst nominally the titles are based around wherever Carolyn, Douglas, Martin and Arthur are scheduled to fly to in the episode, there are a couple of episodes that bend that convention. The first series' "Fitton" is, indeed, set entirely in Fitton (the fictitious town somewhere in or near the West Midlands that MJN operates from), but for nearly all of the episode the crew are waiting on board the plane for a customer it looks unlikely will ever turn up; in "Ipswich" the crew are visiting said town in order to take part in a safety course; they do set out for "Johannesburg", but never reach it in the episode with that name, which is largely concerned with an emergency landing in Spain; "Rotterdam" gets its name from a flight MJN is scheduled to make in a few days, but not during that episode, although the fact that that is where the flight is going is a sufficiently important plot point; and "Timbuktu" concerns the crew attempting to con their passenger into believing that is where they're going. The only episode that bends the rule so much for it to be a problem is "Kuala Lumpur", which is set entirely at Fitton Airport, and gets its name from a single line of Arthur's during a subplot that seems suspiciously like it's only there in order to ensure the episode manages to follow the 'alphabetical titling' rule, no matter how tenuously. Perhaps not coincidentally, this is the least favourite episode of writer John Finnemore (who has gone as far to say that given the chance, it is the only episode he'd replace with a totally different story), and seemingly just about everyone else.

But on to the snags. Back when the second series was broadcast in July 2009, it was struggling to get noticed. The first episode scheduled to air was "Gdansk", but "Helsinki" featured a pretty big-name guest star - Alison Steadman. And when newspapers review radio comedies, they have a tendency to review the first episode of the run. So the show's producer decided to swap them around to try and increase the show's visibility, despite meaning the show would not be broadcast alphabetically as planned.

The swap does not harm the show's continuity in any way, the first two series both being pretty episodic (and I have to say that I think "Helsinki" does work better as a series opener). However, "Gdansk" does feature a pretty major revelation which goes on to become the key dilemma to the show - namely, that Martin works for MJN completely unpaid. This would seem to have more impact being part of the premiere, rather than the second episode - and there is a nice little bookend with Douglas bringing it up again and Martin revealing his secret double life as a man with a van in the final episode of the series, "Limerick", although it would perhaps be a little too pernickety to suggest that that is spoiled by the reordering. "Gdansk" also follows up on the revelation at the end of the first series that Douglas pretends to his wife that he's the captain, which is perhaps the biggest tell-tale sign of all to anyone who didn't notice the alphabet thing that this episode was originally meant to come first.

The second snag comes in Series 3, and is even more interesting. As with many other radio shows, Cabin Pressure was recorded at a rate of two episodes per session. Benedict Cumberbatch was unable to attend the first night of recording for Series 3, at which "Newcastle" and "Ottery St. Mary" were committed to audio, due to having lost his voice, so Tom Goodman-Hill filled in. All of Martin's scenes for "Ottery" were re-recorded with Cumberbatch at the end of the third session, but "Newcastle" was left as it was - and it was felt too strange to open the series with one of the regular characters being played by somebody else. But it couldn't just be a case of swapping two episodes around, like last time - Series 3 has one major continuity point, in the form of the recurring character Hercules Shipwright. Herc appears in "Newcastle", "Ottery" and "Rotterdam", with a clear line of continuity running through his appearances - so any alternative order has to have those three episodes air in that order. "St. Petersburg" is also clearly meant to be a big, dramatic season finale - hypothetically you could move it to another slot, but it would probably lose something, and I don't think any other Series 3 episode would work nearly so well as a closer.

In the end, the broadcast order they went with was "Qikiqtarjuaq" - "Paris" - "Newcastle" - "Ottery St. Mary", tucking the Cumberbatchless episode away in the episode 3 slot, with only "Rotterdam" and "St. Petersburg" occupying the correct, alphabetical order. Again, this doesn't affect the series' continuity too much, although it does mean that Herc's appearances are all consecutive, rather than more spaced out as intended, and his debut is moved from being in the opener to third in the run (not dissimilar to how Martin admitting he works for nothing got moved away from being part of the series opener) - although it is worth noting that Herc was not intended to be as vital to the conclusion of the series as he originally was, or at least he would have been vital in a very different way, as Finnemore's original intention when he introduced the character was that he would end up betraying Carolyn, but he changed his mind when he saw how well Stephanie Cole and Anthony Head worked together. "Newcastle" also features the series' first potential love interest for Martin, which seems to link into the discussions about the regulars' love lives in the final episode of series 2 - as, indeed, does the beginning of Carolyn and Herc's relationship.

Series 2 and 3's jumbled transmissions were kept for all repeat runs and the initial individual releases of the series on CD, but Finnemore has always considered the alphabetical order the true one, and when the complete boxset was released following the series' conclusion that order was restored.

Finally (in every sense of the word), "Zurich" was originally announced as being a 45-minute special, but by the time it was broadcast it had become a two-parter. Between the lack of audience reaction to Arthur's in-character recap at the start of part 2, the fact that both episodes are a minute or two shorter than normal, and part 1's cliffhanger seemingly being mostly concerned with dividing the episodes neatly in two, it seems pretty likely that this was a decision made during editing when it proved to be slightly too long (or possibly because the 45-minute version proved awkward to find a slot for, especially when the BBC wanted to give it a prime placing in the Christmas schedules) - and it does seem a little odd that the complete series boxset is subtitled "From A to Z", then also prominently mentions containing all 27 episodes, even if you fudge it and say that "Zurich" is one two-part episode...


And here's an interesting little note I couldn't find anywhere else to put. The second series finale "Limerick" is a bottle episode - in fact, bottle episodes don't come much more bottled than this one, which takes place entirely in the ship's flight deck, only features the four regulars, and takes place in real time. Specifically, it takes place between 6.30pm and 7pm, which seems like it's meant to be a meta-joke, with the episode taking place at the exact same time that it's being broadcast... except, at the time, Cabin Pressure debuted at 11.30am, and got a repeat run in the plum 6.30pm slot later on (with only the fourth series having its premiere in the prime early evening position). Was the feeling that more people would hear the repeat? Even if it was, then it's interesting to have a joke that specifically works better when you're listening to a repeat, not the premiere. Or did they believe that Series 2 was going to be premiered in the 6.30pm slot at time of recording, and the BBC changed their mind later on? Could it even just be a coincidence?

Tell you what - here's a quick little guide to the premieres and the first repeats (i.e. all the Radio 4 airings, but not the numerous Radio 4 Extra ones):