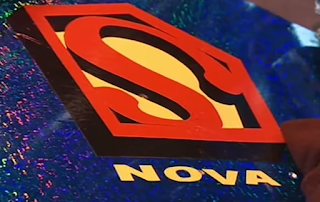 Oh good lord, they're still going. Ahem. Actually, this one's a bit interesting - examples of possible censorship in the show for reasons of copyright or similar.

To start with, let's take a look at War Hog shortly before the filming of its debut in the Fourth Wars, courtesy of the Robot Wars Wiki: 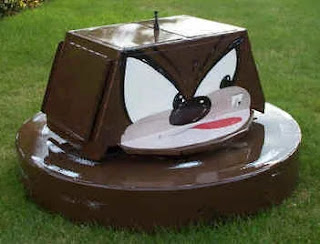 At that point, the robot was called Tazz, but by the time it came to film the show it had evolved into its final design: 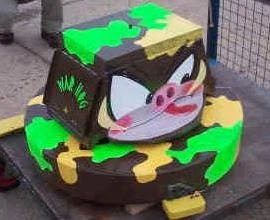 Given the nature of the redesign, it seems reasonable to assume that the change was over worries about the show running into problems with a robot based on a copyrighted character, although I cannot find any source unequivocally stating that to be the case. (Note that there were various other robots that were obvious references to film or television, but generally they were not quite so overt and/or they were BBC programmes - for example, Scutter's Revenge and Spawn of Scutter being an allusion to the Skutters from Red Dwarf. I do not know how litigious Warner Brothers are in general, but the fact that Tazz was such a direct reference to an American property may have led to it being changed.)

In addition, Supernova featured a Superman logo on its Series 6 & 7 incarnations, but when the show returned for Series 8 this had been removed, which may also have been for copyright reasons. Ian Watts implies on his website that Bigger Brother had to be so named because of Big Brother (Bigger Brother's original name being "Big Brother 2"). This could be a joke I'm reading too much into, although it is true that the TV series launched between filming of the third and fourth series of Robot Wars.

Finally, Destruct-a-Bubble was originally named Millennium Doom but its name was changed at the last minute, and whilst its first appearance was filmed in early 2000, I suspect this is more likely to be down to the team's indecisiveness rather than any request the production team received from Stephen Bayley.

And there you have it - an article based entirely on supposition, with absolutely nothing in the way of hard facts whatsoever.

Tell you what - as long as we're going on guesswork, look at this. It's from Series 7 Heat N, and shows the Refbot counting out The Executioner. But why is Raging Knightmare sitting stock-still in the middle of the arena for the whole thing? And why can't you see The Executioner during the countdown? And why does The Executioner teleport to the other side of the arena right after it's counted out? Did they forget to declare The Executioner officially immobilised during the battle (or the House Robots moved in before they had a chance to), and quickly shot the countdown sequence as a pick-up after the battle was over? It's all my supposition, admittedly, but it does look a hell of a lot like that's what happened, doesn't it?

And if we go all the way back to Edit Wars #2, I have a little theory I've been sitting on for a while but have been struggling to find a home for. At the end of Mortis' pinball run, Sir Killalot backs into the pit - was this deliberately done to move the audience's attention away from the producers rigging the whole bloody show? It certainly looks like it could have been done deliberately on the driver's part, but then consider that this was a total accident...
Posted by Christopher Wickham on August 11, 2019