Fighting Fantasy books are predominantly, well, fantasy. The Warlock of Firetop Mountain, Beneath Nightmare Castle, Crypt of the Sorcerer, Master of Chaos, The Keep of the Lich-Lord, Legend of the Shadow Warriors - there's very little doubt as to what genre these titles belong to. The series has occasionally diverged into other settings - over the series' 35-year history there have been two horror stories with a contemporary setting (House of Hell and Blood of the Zombies), a superhero tale (Appointment with F.E.A.R.) and the post-apocalyptic Mad Max-esque Freeway Fighter. But the most notable setting apart from high fantasy is science fiction, which was the setting for seven of the first 33 books in the series. These generally seem to be less well remembered than the rest of the series, and in fact the range's last stab at a science fiction entry was purportedly so negatively received that it completely killed off the idea of any more experiments, with every entry in the series' original run after that coming from the realm of high fantasy. But is this stigma totally deserved? Why not look at all seven sci-fi books from the series in the hope of finding out?

The first book in the series to try something outside of swords and sorcery, Starship Traveller seeks to innovate beyond just its setting - you also have to roll up statistics for your titular starship's crew and keep track of their current statistics, and choose which of them to accompany you on excursions down to planets. There are also separate sets of rules for armed and ship-to-ship combat, the latter of which also requires you to keep track of your ship's current statistics.

The plot involves your ship being sucked through the black hole known as the Seltsian Void, into another universe. Trying to find your way home, the book thereafter turns into an affectionate homage to Star Trek, as you go from planet to planet trying to find the space-time coordinates for a black hole which might return you to your own universe.

Is the sci-fi setting a failure? Absolutely not - many of the individual encounters are a lot of fun, and contain some of my favourite ways to get killed in interactive fiction ever (I particularly like the one where you decide to beam down to a planet covered entirely in water, ignoring your science officer's repeated protestations, and immediately drown). The book itself, however, is significantly shorter than other books in the series - a good 60 sections fewer than normal - and the ultimate goal of getting home is achieved more through luck than judgement, which is a problem but not a significantly dafter mechanic than the impossibly narrow paths to victory several other authors in the series favour. So, a solid premise, a slightly lacking execution.

This book, casting you as a "futuristic assassin" (apparently because you are an assassin in a book with a future setting, rather than actually being futuristic in any way in-universe) sent to infiltrate a starship to capture a crazed scientist before he can unleash a gruesome genetic experiment on your homeworld, also includes a separate set of combat statistics for certain encounters and rules regarding your futuristic armour.

The book itself is fine, but occasionally seems unsure as to if it wants to play things straight or be an amusing homage to science-fiction shows of the day, and coupled with some occasionally rather surreal encounters (I'm sure anyone who read this book as a child remembers the tribe on the alien planet or the cleaners) this leads to a very odd, uneven tone. The book is probably best-remembered for its successful ending being a deeply disappointing two-line paragraph, although again this is hardly a problem exclusively confined to this sort of title (I'm looking at you, Masks of Mayhem). If that section had run slightly longer then I suspect this book would be remembered at least slightly more fondly than it actually is.

This book, the second sci-fi offering on the trot from Andrew Chapman, also includes separate rules for blaster and ship-to-ship combat, but that is the most remarkable thing about it. It's not a bad book, by any means, it's simply very average, with a rather... undescriptive writing style (as well as suffering from the same A Winner Is You syndrome as Space Assassin) and a plot about uncovering an intergalactic drug-smuggling ring that isn't as interesting as it sounds. It is unusual in Fighting Fantasy in that it has two different ways to successfully complete the adventure, but that is its only real innovation. At the halfway point, that seems to be a running theme with these books - they're not at all bad, just not great, but we're still in the early days of the series before bigger, more ambitious stories like Creature of Havoc came along. As the fantasy titles increase their scale and scope, will the sci-fi titles do so too?

Rebel Planet is an improvement on its predecessors, with an interesting plot - the player character is an agent of a secret organisation which has used its last resources to strike at the home planet of the empire currently ruling Earth. It also has special combat rules, as has now become standard, and is generally rather good, with the writing style being a significant improvement over The Rings of Kether. A solid entry, all told.

It's hard not to feel that I could just post the cover of this book and nothing else as an argument for its merits: 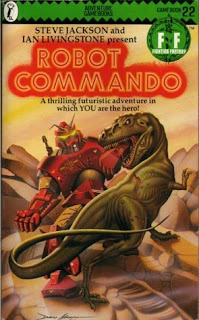 So, the plot casts the player as a rancher on a distant planet, using giant robots to herd the dinosaurs indigenous to said planet, and why am I writing any more, this is clearly the greatest piece of literature ever written... erm, by which I mean a sudden sleeping sickness renders the entire population of the planet comatose apart from you and you have to investigate why. Anyway, as expected there are special rules for when you're piloting your robot, but the structure of the book is a fascinating innovation. You have absolute freedom of movement, being able to go anywhere at more or less any time, and there are multiple possible victories, including some where you don't even have to meet the villains responsible for everything! This is the only Fighting Fantasy book structured this way, although Jonathan Green's more recent books manage to significantly improve on the idea of a Wide Open Sandbox gamebook by giving you a large number of optional sidequests and multiple ways of fighting the endgame; nevertheless, as an experiment Robot Commando is absolutely fascinating, and it deserves to be talked about a lot more than it is. If anything it is probably too ambitious for a 400-reference gamebook, as the huge amount of freedom you have results in a fairly small world to explore and some very short "successful" playthroughs. Still, you have to admire the ambition.

#27 Star Strider
Published 1987
Written by Luke Sharp
Illustrated by Gary Mayes, who was clearly becoming the go-to guy for the sci-fi books by this point (cover by Alan Craddock)

Star Strider has a slightly more generic plot than the last two, casting you as an intergalactic bounty hunter sent to rescue the kidnapped Galactic President before the top-secret contents of his mind are divulged by a Gromulan brainscan. There are no special combat rules, but it is one of the first entries in the series to employ a 'time' mechanic, which would later be used by many other books in the series: if your TIME score ever reaches 0, then the Gromulans have successfully penetrated the President's mind and you have failed. Sharp's writing style is a little... terse for my liking, for want of a better word; he wrote three fantasy-based entries for the series after this, and he seems to get better at writing as he goes on, so who knows what might have happened had he tried another sci-fi entry? (I tried to pick out some examples of the brevity of the text, but somehow isolated examples don't seem to demonstrate it as well; it only really stands out in the full package.) The book itself is alright but doesn't really stand out in any way.

So, six out of seven entries covered, and it would be fair to say that in general I don't think the science-fiction aspects are really holding them back; rather, I don't think the authors are making full use of the different setting. Only Robot Commando feels like it has even come close to aiming as high as it could, and the others just all feel a bit unremarkable. Will the seventh and last book change that?

The player character of Sky Lord is Sky Lord Jang Mistral, a four-armed, green-skinned humanoid sent on a solo mission to a fortress planet to stop renegade geneticist L'Bastin from unleashing his army of clone warriors who all look like dogs on the rest of the galaxy. It is difficult to do the game itself justice, but suffice to say the author has frequently been accused of writing it whilst under the influence of mind-altering substances, and as mentioned earlier the book itself has been blamed for killing off the sci-fi titles in the series completely. There are the usual special combat rules, as well as two special games using diagrams, but these hardly seem to be noteworthy in the face of encounters with Zud the lockmaster and his flesh-melding cylinder, the Gruesome Armatilda, sphere-to-sphere combat, a being from the 17th dimension and Jabob Neror Chintifox the Third, maker of buggies. Martin Allen had previously co-authored the two-player special edition Clash of the Princes, but this was his only FF outing apart from that; frankly, I'm disappointed.

However, despite the accusations levelled at it, it seems Sky Lord was not the reason no more sci-fi entries were produced; rather, according to You are the Hero, they simply never sold as well as the other books in the series, with various reasons being suggested, including the fact that they were all one-shots rather than tying into the rest of the series' continuity and FF fans not being that keen on sci-fi, meaning they slowly petered out rather than there being any deliberate decision not to commission any more.

But I think it is fair to say that the sci-fi entries never produced a truly memorable title; Sky Lord is memorable, but perhaps not for the right reasons. Some of the titles innovate, but they never show scope or scale on the level of Slaves of the Abyss or The Crimson Tide. I don't think they were unsuccessful or unremarkable because of the sci-fi setting; it feels more like the authors generally didn't take advantage of the opportunities that setting offered.
Posted by Christopher Wickham on June 30, 2019