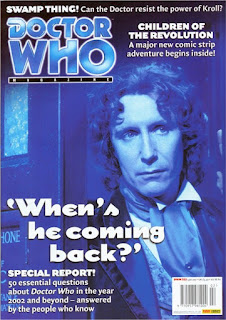 As 2002 dawns, it has been over five and a half years since the Doctor Who television movie starring Paul McGann - intended as a backdoor pilot for a full series - was aired. That full series was never picked up owing to disappointing ratings in the US, and it seems like the show may have missed its chance for its big comeback.

But fans aren't catered to too badly. There are not one but two monthly ranges of novels - one chronicling the continuing adventures of the Eighth Doctor after he departed San Francisco, and another featuring the previously unchronicled adventures of his seven predecessors. Big Finish Productions were producing fully-dramatised audio stories featuring four of the five surviving Doctors and their companions, and their second series of adventures starring McGann were about to kick off. And there's still a monthly magazine, which in January 2002, kicked off the new year with an extensive article asking 50 big questions about the show's future, answered by people in the know. 17 years on, how on the nose did it turn out to be?

Read more »
Posted by Christopher Wickham on February 24, 2019 No comments:

Barking Up the Wrong Bush 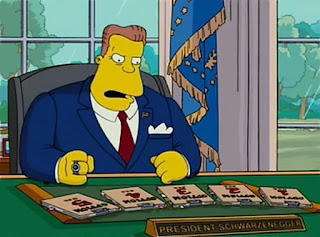 19 April 1987: The first-ever appearance of The Simpsons on television, in a short in The Tracey Ullman Show, "Good Night".
8 November 1988: George H.W. Bush defeats Michael Dukakis in that year's Presidential election.
20 January 1989: Bush is inaugurated as the 41st President of the United States.
14 May 1989: The last-ever Tracey Ullman Simpsons short, "TV Simpsons", is aired.
17 December 1989: The first ever full-length episode of the half-hour Simpsons series, "Simpsons Roasting on an Open Fire", is broadcast.

Email ThisBlogThis!Share to TwitterShare to FacebookShare to Pinterest
Labels: politics, the simpsons

You Can Be the Stainless Steel Rat 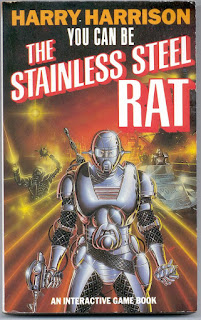 This is a curious little gamebook. A one-off title by the character's creator, Harry Harrison, You Can Be the Stainless Steel Rat is absolutely impossible to lose. All the paths eventually lead to the same victory, although it is possible to get stuck going round in circles. There's also no real inventory management, no statistics, and no dice (although tossing a coin to make a decision occasionally comes into play), making the whole thing comparable to an entry in the Choose Your Own Adventure series. One wonders whether or not Mr Harrison truly grasped the concept behind an adventure gamebook (he never wrote another interactive book again); at any rate, calling this 'interactive' or a 'role-playing game' (the latter term is used on the American cover) seems to have a bit of nerve. Also, the title is a complete misnomer, as you do not play as the Stainless Steel Rat, but rather a new recruit to the Special Corps, with the SSR serving as the book's narrator.

Read more »
Posted by Christopher Wickham on February 10, 2019 No comments: 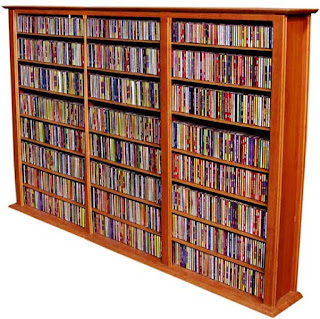 A question nobody ever asks me is, "Mr. Wickham, you've listened to a hell of a lot of Doctor Who plays by Big Finish Productions, where do you think I should start?" I find the company's own list of recommendations quite baffling in several places, so I thought I would make my own, providing examples for each Doctor. (Most of these items are usually put on sale at least once a year, so keep an eye out.)

Read more »
Posted by Christopher Wickham on February 03, 2019 No comments: