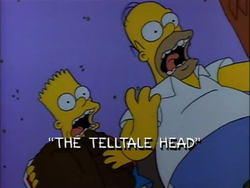 BART: And if you still want to tear apart this young Sunday School student as he stands on the brink of salvation, I await your wrath.
[The mob sounds moved.]
KRUSTY: Somehow, I don't feel like killing any more.

If you happen to watch the Complete First Season DVD's copy of the Simpsons episode "The Telltale Head", you will find those lines in the final scene. However, that is not how the episode was originally broadcast. But just what was aired, and when, and why were the changes made? We can reasonably confidently answer two of those three questions.

Here is the full version of that scene, which is the version that was broadcast in America on the 25th of February, 1990:

BART: And if you still want to tear apart this young Sunday School student as he stands on the brink of salvation, I await your wrath.
[There is a noise here which some sources describe as an "anomalous sound", but which I interpret as the mob shouting]
BART (cont.): But I'd like to add one thing. It wasn't until I removed the head of Jebediah Springfield that we realised we were taking our heritage for granted. That was a crime, too; one I think we are all guilty of.
MEMBERS OF THE MOB: Hey, he's right. / The kid's got us there. / He's got a point there.
BART: And I know I'll always feel an inner shame far greater than any punishment you can dish out. Far, far greater. Far, far, far, far greater.
[The mob sounds moved.]
KRUSTY: Somehow, I don't feel like killing any more.

In addition:
If my writeup of all that has given you a headache, then this YouTube video directly comparing the two versions may be more help.

For an episode of a sitcom broadcast in 1990, working out what was shown when seems to be remarkably easy. As mentioned, Fox's original broadcast on 25/02/1990 featured all of Bart's dialogue, church bells at the end, but no 'lynch mobs' line. It appears that when the episode was repeated on Fox (which happened twice, both in 1990 - the 20th May and 23rd August) it had changed to the version missing Bart's final lines and the church bells, but the 'lynch mobs' line had now appeared. (I am not 100% sure on what was used on each airing, so more information would be welcomed if you happened to have seen one of Fox's original broadcasts, but it does seem fairly certain, from the Simpsons Archive's DVD Companion and Syndication Cuts Guide, that "long version + no lynch mobs" is the originally broadcast version, and at least one of Fox's repeats changed to "short version + lynch mobs".) 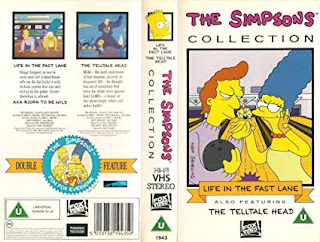 The old VHS releases - such as the 1991 UK The Simpsons Collection release, pictured above - used the original copy, as did American syndication, and that is how the originally broadcast version of the episode survives, as the DVD uses the altered version that was used for Fox repeats. (This appears to be some sort of general policy - if an episode changed between airings for whatever reason, then the videos had the original version, but the DVDs use the revised one.)

But why did the episode change? The only explanation I have ever seen about this comes from IMDB's Trivia page, so right from the off we've got to take it with a pinch of salt. It claims that the extra dialogue was "shoehorned in because Fox wanted the episode to have a moral about people losing their town pride". This explanation does not ring true to me for several reasons, not least that the show had immunity from network censors (as negotiated by James L. Brooks from Fox, which had only been on the air for three years at this point). And it does look to me like the short version has had a bit cut out, due to the abrupt nature of the edit (and Bart's additional dialogue in the full version does, to my mind, rather better justify the mob's decision to forgive him); surely if this dialogue had been inserted by network executives against the producers' will, the short version would look more seamless than it does? If Fox forced the producers to include the extra dialogue, why did later broadcasts drop it - some kind of compromise? How does the addition of the 'lynch mobs' line in the second version tally with this? (Note that the very same page also says that one of Bart's lines during the chalkboard gag says "I did see Elvis"; it doesn't, although the line that's cut off at the end does arguably look a bit like "I did!" as he stops writing midway through the 'N'. Ahem.)

On the DVD commentary for this episode, producer/writer Mike Reiss suggests that it was not unusual for episodes to change after the first run. It is only a theory of mine, but is it possible that after the first broadcast they decided the ending was - for want of a better word - a little too preachy, and needed gagging up? (Homer and Bart walking in front of the mob does look like it was added after the fact rather than being the original intention.) Hence, they cut out a section of Bart's moralising and the church bells, and added in an extra joke at the end. (Compare the two different versions with Bart's epilogue in "Bart the General", or the end of "Moaning Lisa" or "Homer's Night Out", all of which also deliver an aesop but do so in a humorous fashion... whereas apart from Smithers telling Burns the feeling of love is "more than mutual", there aren't really any jokes in the last bit of "Telltale" as originally broadcast, which might have contributed to a desire to go back and change it.)

That's only my theory, but it does seem to fit rather better than IMDB's. However, if you want some evidence that the version with the shortened monologue from Bart is the originally intended version rather than being changed after the fact, then compare the two versions of Otto's line; it does seem like the version as originally aired cuts out the word "man" rather than it being re-recorded. As against that, as the Simpsons Archive points out, it looks like the originally broadcast version runs to exactly 23 minutes and 5 seconds (including opening titles and closing credits), which is the length of time Bart says his story will take at the beginning - can that really be mere coincidence? The fact that Otto and Monroe are in-vision for their lines in the second version is also interesting, and may point towards the short version being a re-edit of the original.

If you happen to have any more information (such as confirmation of what ending each of Fox's three broadcasts went with), that would be most welcome.
Posted by Christopher Wickham on October 14, 2018