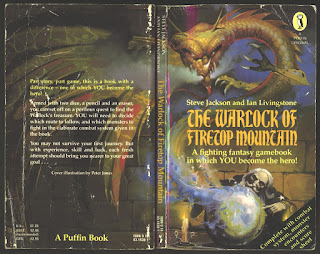 The Warlock of Firetop Mountain, the inaugural Fighting Fantasy gamebook, was published on 27 August 1982; it was the product of previous discussions with the authors (the owners of Games Workshop) about writing a guide to Dungeons & Dragons, only for them to decide they'd rather make their own fantasy adventure that could be played solo, and it quickly proved a huge success.

The publishers, Penguin Books, wanted more. Steve Jackson and Ian Livingstone, the co-authors of the volume, decided to go solo for books #2 and #3. This splitting of labour would allow them to produce two books in the same time as the first one, and would also avoid the infamous problem that arose in Warlock: Livingstone wrote the first half and Jackson the second half, and there's an obvious disconnect in the writing styles that jars when you reach Jackson's part (the crossover occurs at the moment you cross the river).

Read more »
Posted by Christopher Wickham on March 25, 2018 No comments: 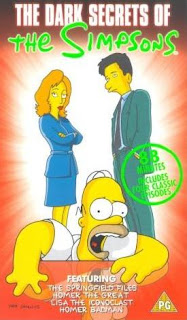 The year is 1997, and The Simpsons is released on home video in the UK in the form of 'themed' videos, each containing four episodes based around a certain topic. The first of these releases was The Dark Secrets of The Simpsons, which contains four episodes themed around MYSTERY AND INTRIGUE: "Homer Badman", "Homer the Great", "Lisa the Iconoclast" and "The Springfield Files". It is the first of these which causes a bit of a problem, and therein lies the video's own mystery. 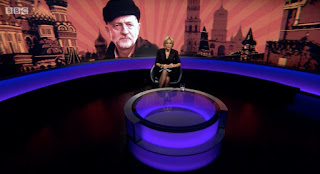 Been a while since we've done one of these (you can find the previous editions here and here), but Hatgate has provided me with an opportunity I couldn't resist. The following quotes are all genuinely taken from Twitter; some are the actual thoughts of Jeremy Corbyn supporters, others are satirical pisstakes. Which is which? Answers at the bottom of the post, as ever.

Read more »
Posted by Christopher Wickham on March 18, 2018 No comments:

Unlikely People To Appear On Live & Kicking Who Genuinely Did

The left-field guests seem to stop after Zoe and Jamie leave. Clearly they were the ones everyone wanted to meet.

Posted by Christopher Wickham on March 11, 2018 No comments: 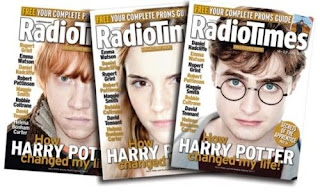 Oh good, it's time for the blog's first visit of 2018 to the BBC Genome. This time round, the search phrase was "harry potter", but what I was particularly interested in was the way the launch of each new book was covered.

Read more »
Posted by Christopher Wickham on March 04, 2018 No comments:

Postcards from the Edge of Simpsons History 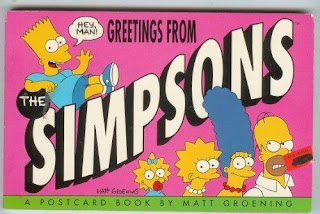 Greetings from the Simpsons is a little book of 32 tear-out postcards (two of each design), and is another interesting curio for any discerning fan. It was released in 1990, near the beginning of the show's second season, making it one of the earliest pieces of merchandise for Our Favourite Family (note that there was another postcard book with the same name but different designs released in 2007).

I still have one each of 15 of the designs; the Principal Skinner one is lost to time (which is a shame, as it was the only one to include a detail explicitly later contradicted by the series, namely that Skinner wears a toupee.) Here are some pictures of the others. 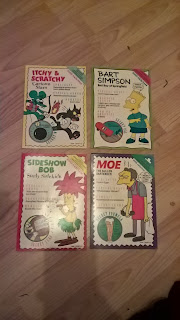 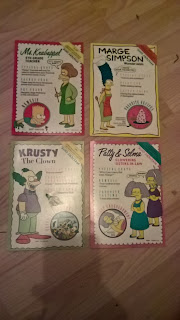 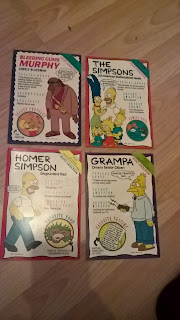 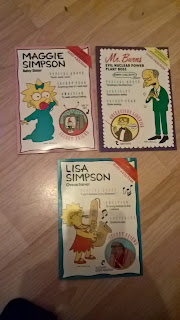 Now, time for a pop quiz. One of these cards is of particular interest to the blog, because it relates to one of the many previous articles I've written about The Simpsons. See if you can guess which one, then join us below the cut to see if you were right.