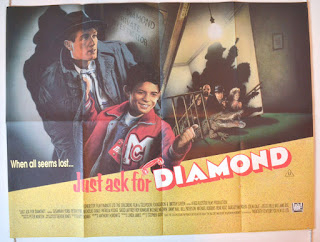 The year is 1986, and some fourteen years before he invents Alex Rider, one of Anthony Horowitz's first major successes is the first book in the Diamond Brothers series, The Falcon's Malteser. It's successful enough to get a movie adaptation, retitled Just Ask for Diamond, in 1988 (retitled Diamond's Edge in the US).

Horowitz went on to write two more Diamond Brothers books: 1987's Public Enemy Number Two, and 1991's South by South East. (He revisited the series over a decade later for four novellas: 2003's The French Confection, The Blurred Man and I Know What You Did Last Wednesday, and 2007's The Greek Who Stole Christmas. A grand finale to the series, The Radius of the Lost Shark, has been promised since 2003 but has yet to be published, although a short story was published in the Guardian in 2011.)

In 1991, South by South East was adapted as a television serial for ITV (I do not know whether or not it was for CITV specifically) under the title The Diamond Brothers, lasting for six half-hour episodes (they may have skipped Public Enemy Number Two because of concerns over content, and/or because it features several sequences that would be nigh impossible to film). The Diamond Brothers were played by the same actors who played them in the film, Dursley McLinden (also known as Sergeant Mike in the 1988 Doctor Who classic Remembrance of the Daleks) and Colin Dale. And that's virtually all we know about it.

Just Ask for Diamond is still readily available on DVD to this day. Not so The Diamond Brothers. As far as I can tell, it was never repeated, and it was certainly never released on VHS, let alone DVD. (IMDB's credits for the series are very sparse, which would suggest whoever added them didn't have their own copies to check.) Not only that, it is remarkably difficult to find any hard proof that it ever even existed. I cannot find a single picture from it, so much as the briefest of off-air recordings, or even any form of promotional material (I can find ITV continuity and adverts from around that period, just nothing that mentions this particular show). If it weren't for the fact that the series is referred to in several of the 'about the author' pages of Horowitz's books, and for this BFI listing, I would be tempted to think that its existence is some kind of elaborate hoax, so seemingly obscure it is. I'm not entirely prepared to rule the possibility out, to be honest. The strongest evidence for the series' existence is that later editions of The Falcon's Malteser were dedicated to the memory of Dursley McLinden, who sadly passed away in 1995; the dedication specifically credits him with playing Tim Diamond "in the film and the TV series".

Another curious thing is that the series seems to have aired with incredibly close proximity to the release of the book it's based on. South by South East was published on 14 March 1991, and if IMDB is to be believed the adaptation began just 12 days later. Horowitz is also listed as the director, but he has no other directorial credits at all (before or after), which seems odd (if IMDB is correct then Stephen Bayly, who directed Just Ask for Diamond, was an executive producer on the series).

If you can shed any light on this - even if it's only to confirm that the series actually was broadcast - it would be welcomed. The film is a lot of fun (recommended viewing around Christmas time), it'd be nice to have another of Dursley McLinden's few screen appearances and it had a rather good cast including Michael Gough and Jenny Agutter, so I'd very much like to see the TV series, and it seems odd that it's so obscure in comparison to the film. It's an adaptation of a well-known series by a hugely successful children's author, and the follow-up to a film which has always been available on home video - surely you'd expect at least some kind of visual record of it to exist?