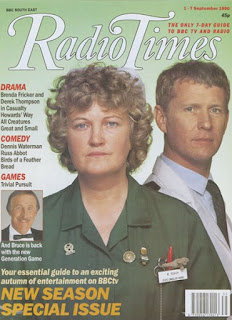 It's time for one of the blog's old standbys: sticking a search term into the BBC Genome and seeing what comes up. After several searches failed to produce anything that was sufficiently interesting to write a blog about, I ended up searching for Saturday-night stalwart Casualty.

Read more »
Posted by Christopher Wickham on October 29, 2017 No comments:

Broken Gamebooks #6: Legion of the Dead 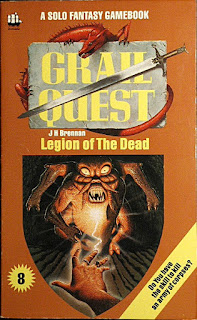 Been a while since we did one of these, so I thought I'd finally finish up the GrailQuest series. Legion of the Dead is the series' grand finale - according to author JH Brennan, the gamebook market suddenly started to tail off at this point and the series was cancelled, although Fighting Fantasy was only halfway through its original run at this point. Brennan was well aware that this was to be the series' swansong, as the book is upfront about being the final volume from page 1. It's certainly got a plot to suit it - Zombie Merlin is leading the titular Legion, hell bent on destroying Avalon!

Now, Legion of the Dead is quite a curious thing. It's not actually a broken gamebook, as far as I can tell. However, whilst it avoids some of the inconsistencies noted in the previous two books, there are certain things which lead me to believe it was written in something of a rush.

Read more »
Posted by Christopher Wickham on October 22, 2017 No comments: 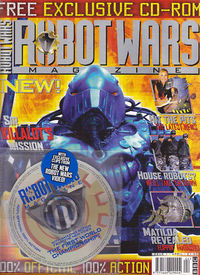 At the dawn of the 21st century, Robot Wars was deemed popular enough to have its own magazine. The first incarnation, published by BBC Magazines, ran for 20 issues, covering the end of the third series and all of the fourth before being canned for generally being a bit rubbish. (There was a second incarnation attempted for the sixth series, which was published by Panini and generally quite good, but it was unfortunately a casualty of the show's erratic scheduling and move to Five, lasting for just seven issues.)

The magazine included a comic strip in every issue; these started out as 'origin stories' for the House Robots based on the programme's original publicity material (we touched on these in the review for the Robot Wars Technical Manual). However, around the time the magazine was being published, the programme was shedding its 'post-apocalyptic' aesthetic in favour of something lighter and softer, and as a result the comic was changed to 'Fantasy Fights': cartoon realisings of dream match-ups suggested by the readers. And fantastical they were indeed. So much so, in fact, that here's a blog post taking the piss out of some of the more ridiculous things in them.

Read more »
Posted by Christopher Wickham on October 15, 2017 No comments:

(Look, if you want to try and come up with a better title for this article, then be my guest.) 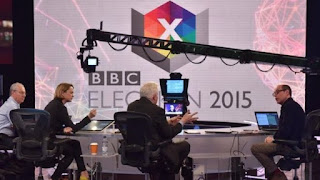 One of the biggest moments of a UK election night is when the exit poll drops, and all the parties who don't like the result argue about how it's obviously wrong for hours until the actual results show it was right all along. The burning question: is there an article that comments on the graphics and accuracy of some of the BBC's exit polls over the years? There is now! 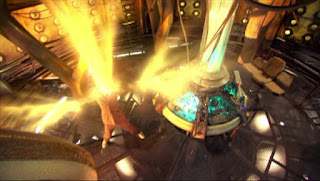 This is a follow-up to last week’s piece on the many lives of Dr Who, and a thought I had whilst reading it… which led me to a conclusion I don’t really like.

All shows depend on change. Any long-running show will need to renew itself every few years, and Doctor Who just so happens to have an in-built mechanism to do that to its lead character. But that’s not the only way in which the show changes. In 1970 the show’s entire format changed by exiling its lead character to Earth; this was a change producer Barry Letts had inherited from the previous production team, and he managed to get multiple second winds by occasionally letting the Doctor sojourn off-planet again, before finally freeing him from his exile permanently in 1973. In 1982, following a bad run of ratings for Tom Baker’s final season, the decision was made to take the show away from Saturday nights and run it twice-weekly on Mondays and Tuesdays instead. Both of those changes coincided with a change of Doctor, but ones that didn’t included the first ever change of companion in 1964, the replacement of Philip Hinchcliffe as producer with Graham WIlliams in 1977, and the decision to make the 1986 season one long 14-part story. The point is: every few years, the show needs a shot in the arm, and it can run on that for a few years before it’s time for the next dose.
Read more »
Posted by Christopher Wickham on October 01, 2017 No comments: