Star Wars on the BBC 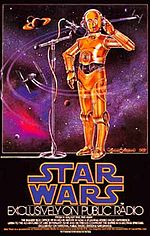 It is time, once again, for me to plug the name of a popular franchise into the BBC Genome and see what comes up. This time: Star Wars!


29 August 1977: The first ever mention of Star Wars on the BBC comes four months ahead of the film’s UK release, as “musical look at the world of films” Star Sound gives us a preview of the soundtrack.
3 December 1977: This one’s slightly baffling to me. Europe 77 was apparently an “international exchange series” about entertainment events in Europe, and it chose to cover the imminent UK release of Star Wars.
14 December 1977: Those previous two listings aren’t anything out of the ordinary. You could probably find many similar references to lesser movies. But here’s the first indication in my trawl of how big a deal Star Wars was; an episode of Arena refers to a film as “the biggest grosser in the USA this year – after Star Wars, of course”.
18 December 1977: Star Wars is covered on Film 77.
22 December 1977: An edition of Kaleidoscope meets “some of the people behind Star Wars”.
11 January 1978: Arena poses the question “What on earth – or in heaven – has caused the phenomenal success of this galactic romp-cum-morality tale?”
28 July 1979: “Cantina Band” is played on what appears to be a rather posh BBC Radio 3 classical music show. This is soon followed by an appearance on Radio 2 in November.
9 April 1980: The Risk Business meets the cast and crew of The Empire Strikes Back.
18 May 1980: A documentary about John Williams heavily mentions Star Wars, to the point that it’s actually titled “Star Wars – Music by John Williams” in spite of the fact it seems to cover his other work too.
20 May 1980: This is, as far as I can tell, the first ever UK chat show appearance by a cast member – Mark Hamill promotes The Empire Strikes Back to Michael Aspel.
26 May 1980: This concerns Jim’ll Fix It, so you’ll understand why I’m reluctant to look into it any further, but it seems it was ‘fixed’ for someone to appear in Star Wars. Not sure what form it took.
20 April 1981: The National Public Radio adaptation of the first film comes to BBC Radio 1; the 13-part serial was still in the middle of its first American run at the time, so this seems surprisingly prompt. It’s broadcast every day at noon, and gets a weekly repeat run just two months after it finishes in July.
27 August 1981: Harrison Ford is interviewed for Star Sound Extra on BBC Radio 2.
May & June 1983: Return of the Jedi is discussed on the usual outlets; there’s an Anthony Daniels interview on Radio 2, but nothing especially remarkable.
15 August 1985: Gary Kurtz is interviewed for BBC Radio 2.
22 November 1986: THX-1138 gets a late-night outing on BBC Two; this seems to be its premiere.
8 November 1988: John Williams is interviewed for BBC Two’s Personal Notes.
7 April 1989: A documentary on Elstree Studios’ 75th anniversary makes mention of a certain sci-fi franchise.
30 December 1991: Willow is listed in the Radio Times as “First showing on network television for this mythic adventure from the creator of Star Wars.”
March 1997: The release of the Special Edition of the first film receives a fair bit of attention.
25 December 1997: A boy gets to meet George Lucas for Noel’s Christmas Presents.
May 1999: As you might guess, there’s quite a lot of coverage for The Phantom Menace. Included in all of this: Star Wars merchandise is profiled by Tim Wonnacott on The Antiques Show, there’s a documentary The Story of Star Wars, The Heaven and Earth Show questions whether George Lucas has founded a new religion, and “as the most eagerly awaited film of all time, Star Wars: Episode I – the Phantom Menace, opens in the USA, Professor Lisa Jardine explores the Star Wars prequel phenomenon and draws parallels with the Medicis of medieval Florence, who used their own prequels from Classical Greece and Rome to reshape Christianity.” Erm.
May 2002: Attack of the Clones time. I learnt from this a fact that is uniquely fascinating to me and me alone: that in the 1980s, the top two best selling things in the UK were Star Wars merchandise and Fighting Fantasy books. What a time to be alive.
12 May 2005: “A suitcase full of Star Wars figures” is presented to experts on 20th Century Roadshow. This article’s getting a bit forced, isn’t it?
15 May 2005: In the BBC Three documentary Generation Jedi, “Dermot O'Leary traces the history of the immensely influential Star Wars saga since it started in 1977. Can the course charted by the films be seen as a metaphor for our times – politically, socially, culturally and personally?” Sounds fascinating. Apart from an interview on BBC Radio 3 with George Lucas, this is the only thing I can find that promoted Revenge of the Sith – was promotion of this one generally a bit quieter after the reception of the last two?
22 July 2005: A “Star Wars sand village” is covered on Blue Peter.
20 April 2006: A Mastermind contestant has Star Wars as their specialist subject, but specifically the original trilogy only.
28 August 2006: “A widow aims to raise enough to improve her beloved Corvette by flogging her Star Trek and Star Wars memorabilia.”
May 2007: A number of Radio 2 programmes cover the 30th Anniversary.
1 June 2007: “A Star Wars fan looks for a house that will suit his tastes” on To Buy or Not to Buy. I’d love to know exactly how that factored into his ‘tastes’…

THERE THAT WAS WORTH WRITING ABOUT. Actually, there’s one rather interesting thing – it seems that only the first radio adaptation was broadcast, and despite the fact that got two repeat runs (and they got the rights so soon), they never broadcast the adaptations of Empire or Return. There’s maybe a bit of a mystery there…
Posted by Christopher Wickham on July 30, 2017