Mr. Lisa Goes Out of Her Way to Make Trouble 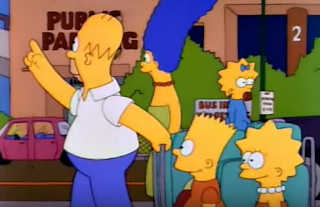 Just a quick one this week. In the Simpsons episode "Mr. Lisa Goes to Washington", the family walks past a sign at Dulles Airport that reads "BUS INFO / 213 937 6236". I've put a picture of it above and everything.

According to The Simpsons Archive, that number was the home phone number of Wes Archer, who directed the episode, and it was placed there without his knowledge.

I'm not the only one wondering how the hell they got it into the episode without him managing to notice, am I?
Posted by Christopher Wickham on May 31, 2017 No comments:

Doctor Who: "The Pyramid at the End of the World" Review

“The Pyramid at the End of the World” is cut from very much the same cloth as “Extremis” was (hardly surprising, really, given it is the second part of a three-part story arc, it is co-written by Moffat and has the same director)… and hence, I’m afraid for the second week running, I really disliked it. Still, last week’s hugely negative review got twice as many hits as the blog usually does, so there’s always a silver lining, eh?
Read more »
Posted by Christopher Wickham on May 27, 2017 1 comment:

If ever any television series was crying out to be adapted for a series of adventure gamebooks, it was Knightmare. And that’s exactly what happened, with six books published between 1988 and 1993.

(There was also a seventh book, Lord Fear’s Domain, which will not be covered in this article for two reasons. The first is that it wasn’t a gamebook but a straightforward puzzle book, and the second is that I can’t find a cheap copy online. For the record, books #1, #2, #4 and #6 were ones I owned from my childhood, and books #3 and #5 were purchased second-hand for the purposes of this article. Where were we?)

Each book is split into two halves – a novella running to between 70 and 115 pages, and then the adventure game itself, which ran to anywhere between 90 and 170 sections. (The reasons for the dramatic differences in length will become clear in due course.) For each book, I watched an episode of the television series that would have been broadcast around the time the book was released, and then played the game and compared the two. (Alternatively, I just rambled on about the book for a bit.) The only way is onward – there is no turning back!
Read more »
Posted by Christopher Wickham on May 24, 2017 No comments: 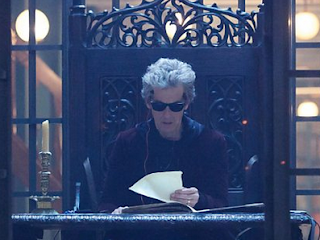 I admit it: I had a bad feeling about this episode going in. The plot sounded to me like something that would be really easy to spectacularly mishandle, and last week’s cliffhanger only compounded matters.

And I didn’t like “Extremis”. In fact, if you read on, I didn’t like it at all. But I don’t think it was due to my preconceptions, because for a lot of the time, it feels like the episode is telling a totally different story to the one that was advertised. Unfortunately, that story is totally incomprehensible.
Read more »
Posted by Christopher Wickham on May 20, 2017 No comments:


Over the last three instalments of Edit Wars, we’ve covered a Robot Wars fight that has two different versions, and two others where the producers were trying to cover up something a bit dodgy in the edit. This concluding article contains a veritable gallimaufry of examples that are similar to the latter, but are more minor and I can’t spin a whole article out of, plus the occasional piece of related trivia thrown in for fun.

Note that virtually every battle in the show’s history was edited down to highlights – it wasn’t uncommon for a battle that lasted the whole 5 minutes in reality to be cut to less than 2 minutes – and obviously I won’t list every such example here. There’s plenty more information about a lot of these on the Robot Wars Wiki if you want to go looking.
Read more »
Posted by Christopher Wickham on May 17, 2017 No comments:

Doctor Who’s tenth series serves up another evergreen plot idea with “Oxygen” – the space station under siege. With the story assigned to a reliable writer (Jamie Mathieson, who previously gave us The One With The Mummy, The One With The 2D Monsters and The First One With Arya Stark) and director (Charles Palmer, whose past Who work includes The One With Shakespeare and The One Where The Doctor Becomes Human), I initially had a very positive response to it, but in retrospect I think the story works more on style than substance.
Read more »
Posted by Christopher Wickham on May 14, 2017 No comments:

Inspired by my similar piece for The Simpsons chalkboard gags a few weeks ago, it’s time for a similar look at another show. At the beginning of every episode of Futurama, there’s a humorous caption on the title slide. Don’t take my word for it, here’s an example: 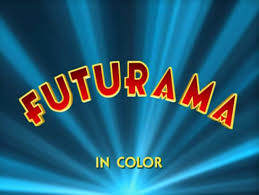 But if you have the DVDs, you’re not getting the full title caption experience. Here, then, is a list of all the known anomalies.
Read more »
Posted by Christopher Wickham on May 10, 2017 No comments: 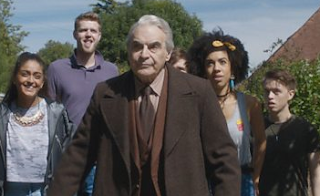 “Knock Knock” continues the feeling of Doctor Who’s current run trying out ideas that have long since been the show’s bread and butter by giving us a horror story set in a haunted house. TL;DR: It’s genuinely excellent up until the final three minutes, when the episode makes its only misstep… but unfortunately it’s such a large one that it does ruin things for me quite a lot.
Read more »
Posted by Christopher Wickham on May 06, 2017 No comments:

The gamebook doctor is in again, and he’s diagnosing the penultimate book in the GrailQuest series, Tomb of Nightmares. Whilst the series generally existed to be a bit of a laugh, Tomb is a bit more puzzle-orientated (though still very funny)… because the entire gamebook is basically one big maze (that has a really evil tendency to randomly teleport you back to the same section over and over again, which the book ends up amusingly lampshading). Not only does the adventure feature a large number of monster encounters and precious few opportunities for healing, it also features an extra ‘secret doors’ mechanic, which works like this:

To search for a secret door in any section, throw one die. Score 4, 5 or 6 and you are entitled to check the secret door table which starts on page 186. Score less than 4 and you have missed any secret door that might be there.

(Curiously, a few earlier sections offer you the choice to check for secret doors in the text as well as using the secret doors table, which seems a bit odd.) Anyway, it’s a tricky book, and I was forced to map it by using a spreadsheet for this article.
Read more »
Posted by Christopher Wickham on May 03, 2017 No comments: