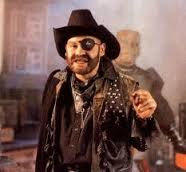 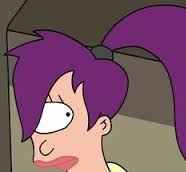 Welcome to the concluding part of my Futurama/Red Dwarf comparison, split in half because of readability and making the best of my tendency to make these articles probably far too long. Let’s get straight into it with a look at some more classic sci-fi tropes…

Read more »
Posted by Christopher Wickham on March 26, 2017 No comments:

(NB: Somebody else beat me to the title “Futurama Echoes”. Alternative titles include “Stasis Leak Pilot 3000” and “Listerama”.) 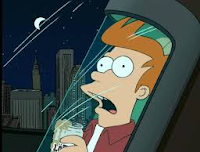 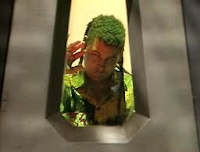 In 1988, the science fiction sitcom Red Dwarf began on BBC2. The first episode sees Dave Lister frozen in time and wake up in the far future.

In 1999, shortly after Red Dwarf had seemingly wound up for good, the science fiction sitcom Futurama began on FOX. The first episode sees Philip J. Fry frozen in time and wake up in the far future.

Okay, it’s an overly simplistic comparison… but it’s a rather good one to make, as it does highlight the differences and similarities between the two shows.

Read more »
Posted by Christopher Wickham on March 19, 2017 No comments:

Way, way back in the mists of time of, erm, about three months ago, when I first started this blog, my very first post extolled the virtues of the GrailQuest adventure gamebook series. What I didn’t mention at the time is that some of the later books in the series suffer from serious playability issues and a lack of proofreading… which they (for me) get away with because of the series’ wit and creativity. So, because heaven knows this blog isn’t niche enough as it is, why not try and summarise those issues and see if they can be fixed?
Read more »
Posted by Christopher Wickham on March 12, 2017 No comments: 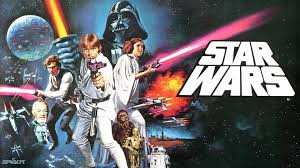 On 27 December 1977, Star Wars finally received a theatrical release in the United Kingdom, allowing us all to see what the United States had been making such a fuss over since May of that year. Barely a week later, on 7 January 1978, Doctor Who returned from its midseason break over the Christmas holidays with a new four-part serial, Underworld.

If you’ve happened to read any other piece that mentions both that first Star Wars film and Doctor Who, it is quite likely those two facts happened to be mentioned. Because, you see, Star Wars is a good piece of science fiction. Underworld isn’t.

The story goes that the then-Doctor Who producer, Graham Williams, had attended a preview screening of George Lucas’ film and realised that his show’s production values weren’t really going to be able to hold a candle to this. He quickly made an attempt to try and enhance the appeal of Underworld, which was then in pre-production… but a confluence of factors (including Williams going on holiday, another script turning out to be impossible to produce and inflation severely affecting the budget requiring Williams to come up with an unprecedented way of saving money) meant that a lot of the story ended up looking like this: 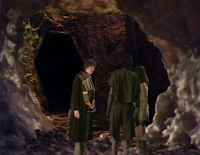 And perhaps the bigger problem is that Underworld simply isn’t a very good story. It’s just not very interesting, which isn’t a criticism you can really level at the other sci-fi franchise we’re discussing here. And that’s why Underworld, and indeed most of the rest of that season of Doctor Who, has a tendency to be mentioned rather disparagingly in connection with Star Wars – children went to the cinema to see an exciting, impressive-looking piece of sci-fi, and then returned home to watch something that was anything but.

But you may be aware that there have been quite a few more Star Wars films since 1977. How did the Doctor Who stories of the time square up to them, and is the result interesting enough for me to write a blog post about? Let’s find out. (For the purposes of this article being readable, we’ll cover the six ‘main’ films in the remainder of the original trilogy, the prequel trilogy and the one film in the sequel trilogy that we’ve seen at time of writing, not Rogue One or the Clone Wars TV series.)

Read more »
Posted by Christopher Wickham on March 09, 2017 No comments:

Email ThisBlogThis!Share to TwitterShare to FacebookShare to Pinterest
Labels: doctor who, star wars

Let joy be unconfined: it’s one of those other articles about Robot Wars I promised you some time ago. (This story may already be familiar to you if you’re a big fan of the show, but I still reckon it’s worth telling again.) Last time around, we were interested in two different versions of the same episode. What we have here is a rather different kettle of fish – there’s only one version of this episode, but it’s been edited to avoid giving us the whole story, and what really happened is alluded to later on in the series.
Read more »
Posted by Christopher Wickham on March 02, 2017 No comments: