7 - 13 August 2000: The main competition part of the fourth series of Robot Wars is filmed.

14 - 15 August 2000: Various specials and side tournaments for the same series are filmed. This includes the Sumo Basho tournament, which will be broadcast across the first eight heats.

The fact that the non-competition stuff is filmed after all the fighting, but most of it broadcast first, would not be a problem... were it not for this. 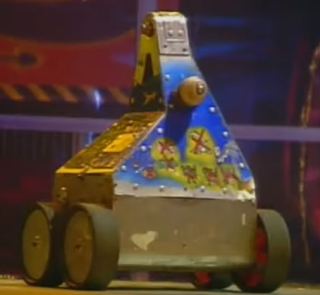 Read more »
Posted by Christopher Wickham on January 06, 2020 No comments: 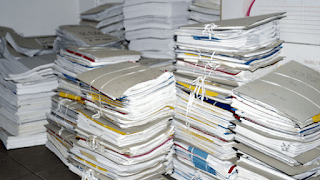 It was always my intention to start writing a blog some day. Several of the pieces I have written over the last few years have existed as ideas in my head for anything up to a decade before I finally got around to them here; it was not until I answered a question Andrew Ellard had about an adventure gamebook on Twitter that I found I needed a space to write something, and once I had the space I decided to set myself the totally arbitrary target of seeing how long I could keep it updated at least once a week for.

To my surprise, that has turned out to be very slightly more than exactly three years and (including this one) exactly 200 posts, and the magic of pre-scheduled posts has finally run out; going forward, the blog will not be updated weekly, but whenever I happen to have a new thing to talk about, or I can finally afford to shell out for the eighties obscurity I want to discuss, or when the BBC finally start answering my e-mails about releasing all two thousand hours of Robot Wars rushes.

Until then: Much thanks to, apart from Mr Ellard for providing the impetus to start the thing in the first place, John Hoare, Wesley Mead, Steve Williams, Ian Symes, Darrell Maclaine-Jones, Tim Byrne, Jonathan Green, Rebecca Fisher and everyone else who has ever left a nice comment on an article, linked to something I've written on somewhere far more widely-read, checked a specific copy of an adventure gamebook to see if it still has a mistake the earlier printings did or given me some interesting information about late changes to a TV schedule. You've all been very kind, and I doubt the blog would have kept going for so long without you. Beneath the cut, you will find a selection of my favourite pieces from the last year; hopefully, there'll be something new along soon. 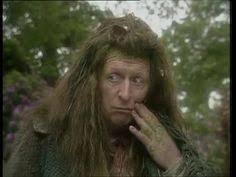 The very first adaptation of The Lion, the Witch and the Wardrobe was broadcast on the BBC Home Service in September 1959, as part of their Children's Hour strand. It lasted for 6 40-minute episodes, adapted by pioneering radio producer and writer Lance Sieveking, and as you might expect, nothing is known to survive of it today. (Sieveking's Wikipedia article states that the adaptation he did was of The Magician's Nephew, but this appears to be an error based on a 2005 Guardian article about the forthcoming film.)

Read more »
Posted by Christopher Wickham on December 22, 2019 No comments: 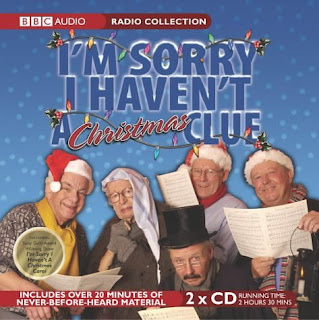 Christmas Day 2003: I'm Sorry I Haven't a Christmas Carol makes its premiere on BBC Radio 4. It is quite a remarkable accomplishment by writers Graeme Garden and Iain Pattinson - using a comedy panel show as the template for an adaptation of A Christmas Carol, with chairman Humphrey Lyttelton cast as Ebenezer Scrumph, regular panellists Garden, Barry Cryer and Tim Brooke-Taylor as (amongst many other roles) the Ghosts of Christmas Pissed, Present and Queen Boadicea (The Ghost of Christmas Yet to Come having been delayed due to unforeseen circumstances), and regular pianist Colin Sell as Colin Crotchit, with Stephen Fry as the narrator and other members of the show's extended family of semi-regular panellists making up the rest of the cast.

October 2004: I'm Sorry I Haven't a Christmas Carol is released on CD and audio cassette, as a specially extended edition boasting "over 20 minutes of never-before-heard material".

December 2019: Some idiot with an arbitrary target of keeping his blog updated once a week for as long as possible decides to write something on that extended edit.

Read more »
Posted by Christopher Wickham on December 15, 2019 No comments:

Email ThisBlogThis!Share to TwitterShare to FacebookShare to Pinterest
Labels: i'm sorry i haven't a clue 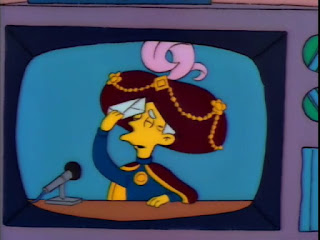 Well, Channel 4's premiere of Season 27 of The Simpsons started on the 4th November, and wrapped up on the Tuesday just gone. Before it started, I used all my mystic powers to predict what episodes might be censored, or even dropped altogether, and now it's time to look back and see just how accurate I was. I can't say this is a definitive list of all the censorship cuts, but it probably covers everything worth mentioning (I didn't manage to catch their showing of "'Cue Detective", but I can't think of any cuts they might have made to that anyway).

Back in the day, of course, if you missed an episode of Doctor Who that was it. No VCRs, no catch-up services, nothing. You'd have to get a friend to re-enact it for you in the playground, wait for the Target book to come out, or hope the BBC repeated it at some point. Would you like a list of every time that last thing happened?

Read more »
Posted by Christopher Wickham on December 01, 2019 No comments:

Get Into Jail Free 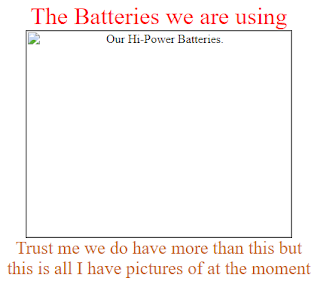 The Robot Wars Wiki is an amazing resource, thanks to its tireless editors who never stop looking for new information about the show. Here's a piece that recently came to light on the Internet Archive thanks to their diligence - the sad story of Series 3 entrants The Jailer, who successfully qualified only to withdraw on the day of filming due to a broken speed controller.

So, The Jailer had to pull out at the last minute. And diligent readers may recall there are two robots that were pulled off the substitutes bench at the last moment. Does it follow that either Steg-O-Saw-Us or Triterobot were the replacements for The Jailer? Possibly not, because we can't be sure the robots listed in that article were the only substitutes - there may be other robots who were also pulled in at the last minute but not identified as such onscreen. But wouldn't it make sense, given how late in the day The Jailer had to pull out and how late in the day those two were brought in? We're halfway to another piece of the puzzle, surely? And there must be another robot who had to pull out at the very last minute, quite possibly also on the day of filming - is their story still out there somewhere?

Posted by Christopher Wickham on November 24, 2019 No comments:

I CYOA What You Did There 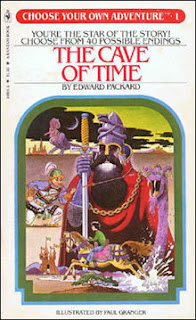 Having been writing this blog for nearly three years now, it is perhaps surprising that this is the first time I've ever written something about the Choose Your Own Adventure series. It was a range that popularised the gamebook genre, to the point that its title is to this day used as a synonym for interactive fiction. Edward Packard, who wrote the first ever title in the series and went on to write nearly a hundred more of them, may very well have invented the idea of the gamebook with Sugarcane Island in 1969 - certainly that book was one of the very first gamebooks ever written. The historical importance of this series cannot be denied. So why has it taken me so long to get round to it?

Well, this series is absolutely fucking massive. There are 184 books in the original series alone, and once you include all the various spin-off series (variously aimed at younger and older readers, intended to be more 'educational' or scarier than the parent series, featuring licensed Disney characters, an Indiana Jones series, a Star Wars series, not to mention the early noughties revival with revised versions of the original books designed to bring them up-to-date) that number swells to well over 300. I devoured adventure gamebooks as a child, and I doubt I got through any more than a small percentage of Choose Your Own Adventure books.

And yet... many of them aren't remarkable by themselves. They generally run to just over 100 sections, there's no game system of any kind (no statistics or inventory to keep track of), and with so many entries in the series - cranked out (largely) monthly for the better part of two decades between 1979 and 1998 - it's hardly surprising that there are a fair few where the story just isn't very interesting, or there is little in the way of any real plot. You can't get anything hugely insightful out of many of the individual entries, yet trying to write a history of the entire series is an impossible task. Perhaps the most memorable feature of the books is the surprisingly gruesome and inventive deaths, and plenty of other people have had a go at archiving the best of those.

So for this post I thought I'd highlight a few of the more notable entries in the series - ones I have fond memories of reading as a child, or are notable for unexpected twists or interesting set-ups.

Read more »
Posted by Christopher Wickham on November 17, 2019 No comments: