Have I Got Radio Times Listings for You

Way back in the 1990s, the producers of TV programmes used to get to write their own synopsises for episodes that would be used in the Radio Times. This was particularly interesting when it came to comedies. Rob Grant and Doug Naylor, writers of Red Dwarf, liked to slip in extra jokes: here’s a good one from the original broadcast of “White Hole”, and one from “Better than Life” that subsequently ended up adapted for use in an episode the following year. David Renwick, writer of One Foot in the Grave, deliberately submitted highly misleading descriptions; the ‘unlikely love affair’ described in the synopsis for the first showing of “The Exterminating Angel”, is in fact Margaret trying to set up Mr Swainey on a date, whilst Victor ‘taking to the road’ refers to his new job as a chauffeur.

Whilst having a good laugh at some of these, I thought: What about non-scripted comedy shows – more specifically, panel shows? Did the producers of those ever think to muck about with their listings in such a way? So I trawled through the BBC Genome for every mention of Have I Got News for You it had, and here’s what I found.
Read more »
Posted by Christopher Wickham on June 28, 2017 5 comments:

Email ThisBlogThis!Share to TwitterShare to FacebookShare to Pinterest
Labels: have i got news for you

The ever-traditional two-part Doctor Who finale gets underway with a pre-titles sequence where the Doctor stumbles out of the TARDIS, lost in an icy desert, seemingly about to regenerate. Whilst it’s undoubtedly a striking image, it leaves me worried we’re going to get our least favourite type of Steven Moffat: the “deliberately pitching the entire thing to a tiny section of the audience” Moffat. That doesn’t really tend to work out well. But what of the episode itself?
Read more »
Posted by Christopher Wickham on June 24, 2017 No comments: 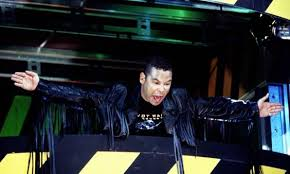 I’ve discovered that, scandalously, there is nowhere on the Internet that collects every single rhyme Craig Charles signed off Robot Wars with on one page. Enjoy.
Read more »
Posted by Christopher Wickham on June 21, 2017 No comments:

Doctor Who: "The Eaters of Light" Review 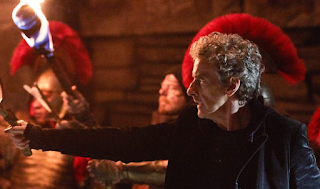 “The Eaters of Light” marks an interesting milestone for Doctor Who: the first time the revived series has used a writer from the classic series. Rona Munro contributed the final serial of the original run, Survival, a story often held up as being a template for Russell T Davies’ revival. (NB: Wikipedia goes by the rules that serials should be in italics, but single episodes should be in quote marks. There’s a bit of trivia for you.)
Read more »
Posted by Christopher Wickham on June 17, 2017 No comments:

Sit in a Bottle 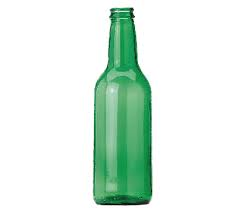 I’m sure you all know what bottle episodes are. They’re episodes of television shows that are filmed only on pre-existing sets, with few (if any) actors other than the regular cast members. (They may also be told in real time, but that’s not a prerequisite.) For this reason they tend to be known as “the cheap one”, or “the one that’s replaced another episode that’s fallen through at the last minute”. Anyone who knows anything will know that this does them a grave disservice, as they often lead to some of the greatest moments their respective series will ever produce.

I really, really like bottle episodes, because of how much their minimalistic approach reveals about the show, they produce some of the best performances from the show’s cast members, and they often have fascinating stories behind their production. I particularly find them interesting in the case of audience sitcoms – that’s basically live theatre playing out in front of an audience. So I thought I’d grab one example each from three different audience sitcoms and see what each one tells us, if anything. (I considered widening the scope to include drama series… but the article started getting a wee bit over-complex. Maybe another time.)
Read more »
Posted by Christopher Wickham on June 14, 2017 No comments:

Email ThisBlogThis!Share to TwitterShare to FacebookShare to Pinterest
Labels: cabin pressure, one foot in the grave, red dwarf

Doctor Who: "Empress of Mars" Review 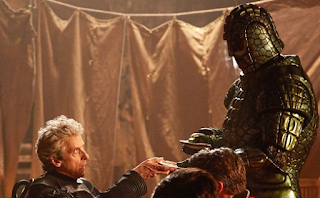 (Foreword: I was at a Who convention this past weekend. Apart from explaining why this review is later than normal, it also meant that I watched this episode on a big screen in the company of over 100 other fans, most of us in various states of inebriation. The next day there was also a panel featuring Ian Hallard and this episode’s main guest star Adele Lynch, from which I was able to glean a few bits of interesting information about this episode I’ve slipped into this review.)
Read more »
Posted by Christopher Wickham on June 11, 2017 No comments:

Broken Gamebooks #4: Revenge of the Vampire

Time once again to examine the flaws of an adventure gamebook in unnecessary detail. This time it’s one of the last books in the greatest gamebook series of them all, Fighting Fantasy. The fifty-eighth and penultimate book in the original series, Revenge of the Vampire, is notable for going for silly money on eBay these days, having one of the most gruesome death scenes in gamebook history and, yes, a few logistical problems.
Read more »
Posted by Christopher Wickham on June 07, 2017 No comments:

Doctor Who: "The Lie of the Land" Review 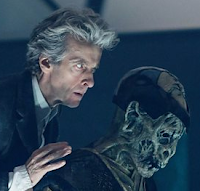 “The Lie of the Land” chimes with the rest of its series: there are both good and bad elements, and unfortunately the less-good stuff drowns out what I actually like about the story. To try and do this review a bit differently, I’ve broken the episode down into two corresponding lists.
Read more »
Posted by Christopher Wickham on June 03, 2017 No comments: 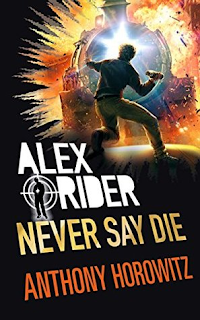 “Never Say Die” is the tenth adventure of Alex Rider, and the first since author Anthony Horowitz decided to end the series with “Scorpia Rising” in 2011. It’s fairly unusual for a YA fiction protagonist to come back after the author has decided to write their final adventure and, six years on from what is now no longer the last Alex book ever, this was a faintly surreal read (especially given I was still in higher education when the last one came out). I enjoyed it overall… but there’s one big problem with it.
Read more »
Posted by Christopher Wickham on June 01, 2017 No comments: